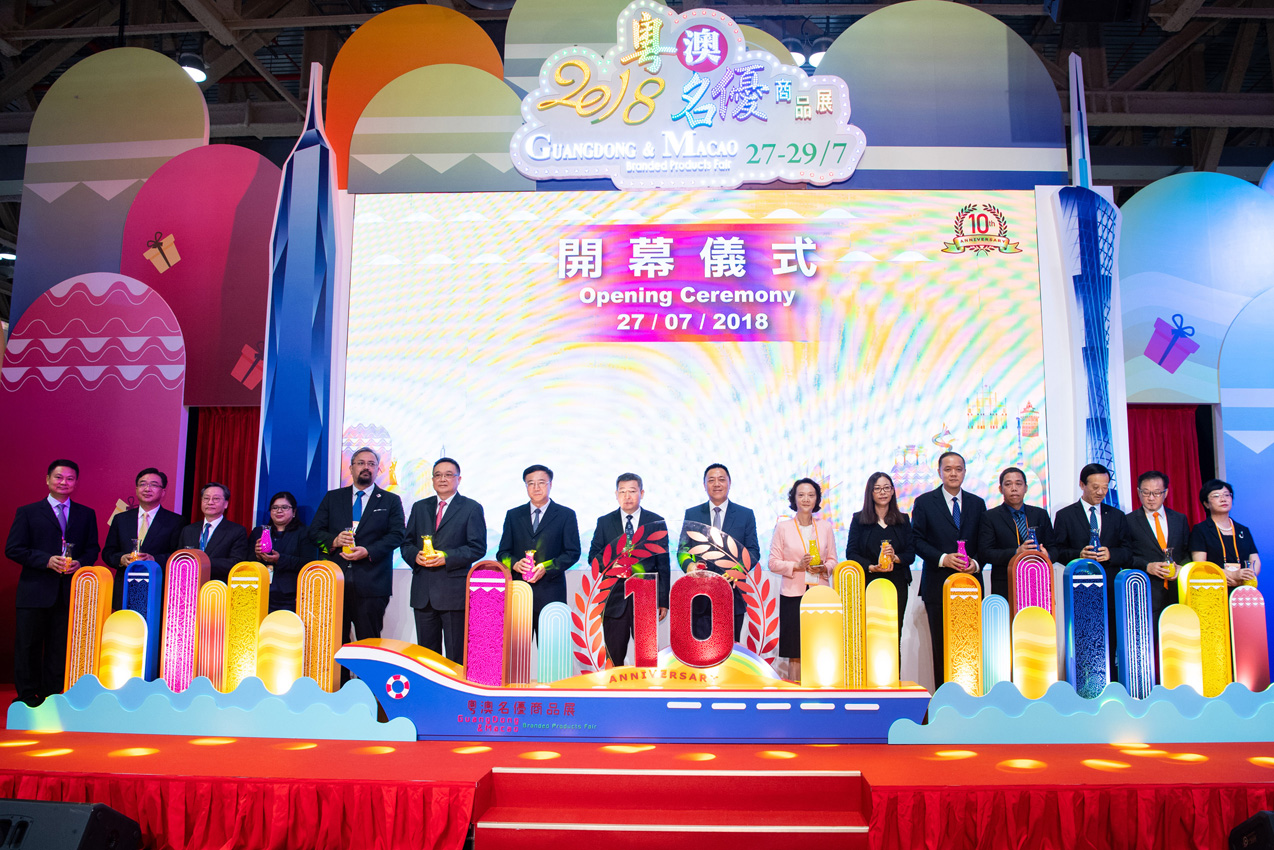 Jointly organised by the Macao Trade and Investment Promotion Institute (IPIM) and the Department of Commerce of Guangdong, the Guangdong & Macao Branded Products Fair 2018 (2018GMBPF) was held at the Venetian Macao from 27 to 29 July. The three-day fair attracted a large number of residents and visitors, which was on par with last year. There were also 382 booths at the event and most exhibitors reported a satisfying sales performance.

The 2018GMBPF was held over a large exhibition area, spanning an impressive 9,000 square metres of space. This year’s fair featured an array of exhibition areas including the “Guangdong Province Branded Products Exhibition & Sales Area”, “Macao Featured Products Area”, “Guangdong-Hong Kong-Macao Bay Area Exhibition Area” with the theme “Guangdong-Macao 10th Anniversary Pier”, “Belt and Road Exhibition Area”, the newly-established “Guangdong-Macao Young Entrepreneur Exhibition Area”, and a special exhibition area for Congjiang county of Guizhou. The Guangdong province was represented at 2018GMBPF by about 132 enterprises, while the “Macao Featured Products Area” attracted approximately 112 enterprises. A total of 44 companies set up their booths at the “Belt and Road Exhibition Area”. Events such as the “Roundtable Conference of Guangdong-Hong Kong-Macao Greater Bay Area Commercial Organisations”, “Macao-Congjiang Co-operation on Trade and Economics Series – Marketing Strategies for Branding and Exhibitions”, “Sharing Session on Young Entrepreneurship” and product promotional sessions were also held during the fair, aiming to help enterprises seize business opportunities for the future development of the Greater Bay Area. 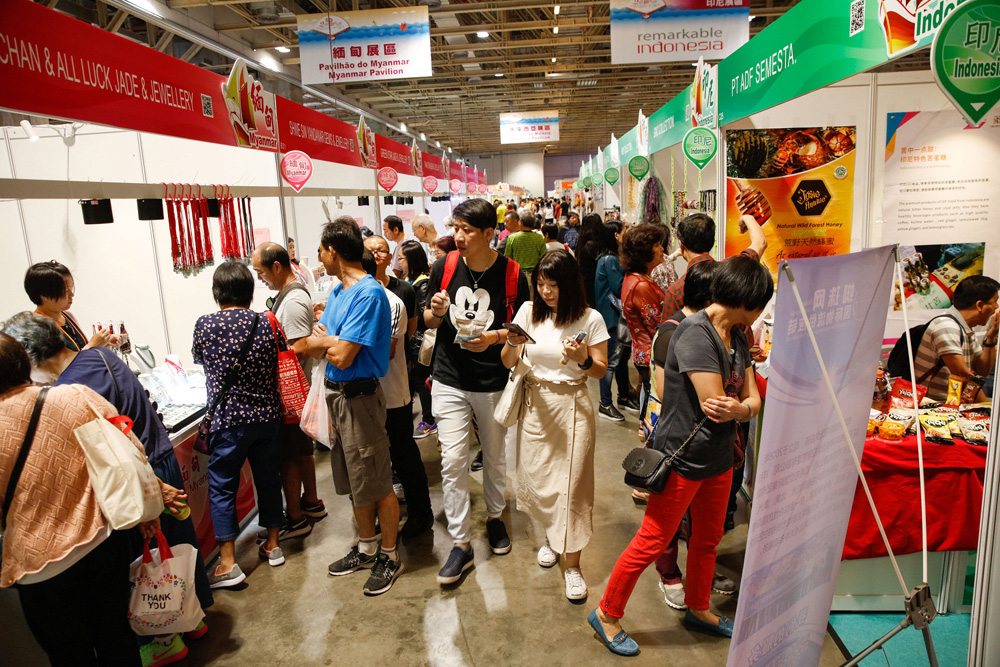 The latest edition of GMBPF was held concurrently with MFE, both marking their respective 10th anniversaries this year. In celebration of these milestones, there were a wide variety of exhibitors at the venue, with a rich performance programme to create a better shopping and entertainment experience for residents and visitors from around the world. The event featured a large number of “check-in points” and “game corners”, detailing the advantages of Macao as a Commercial and Trade Co-operation Service Platform between China and Portuguese-speaking Countries; also on site was the show’s mascot “Ba Ba” and its friends, and the opportunity for visitors to take part in Virtual Reality (VR) experiences; all as part of celebrations to mark the 10th anniversary of GMBPF. These promotional activities helped launch a number of creative offerings at the venue, including “Guangdong-Macao 10th Anniversary Pier”, “The Florist’s Garden”, “Stroll and Seek” and “Ba Ba Treasure Hunt”, attracting many visitors to play and to take photos.

VR technology was also used at GMBPF for the first time: an online VR catalogue enabled the public to find information on a variety of innovative products showcased before the exhibition. In addition, Antonieta Manhão, a renowned chef from Macao, was invited to attend the event, as was He Huihong, a chef from Shunde, a city in Guangdong that was also designated by UNESCO as a “Creative City of Gastronomy”. While Antonieta Manhão and He Huihong performed a cooking competition, there were also food lovers from both places that explained the history behind the food and introduced a variety of delicious snacks to the public.

The organisers also put together guided tours for exhibitors so that they could explore local neighbourhoods. The aim of these tours was to offer a deeper insight into the economic development of the city, to boost community economies, to benefit local SMEs and to increase the effectiveness of the fair.

Exhibitors were happy with the number of visitors and also the promotions, which they said were very effective. By participating in the 2018GMBPF, enterprises discussed co-operation with other exhibitors and others said that in addition to B2C partners, they were also able to establish B2B partnerships. Exhibitors reported that the event allowed them to achieve their respective goals in terms of product sales and partnerships.

Eleven leading enterprises from Congjiang county of Guizhou province participated in the GMBPF, showcasing their agricultural products such as rice, pork, eggs and more. It was the first time for the county to send a delegation to the event. Tu Gang, Magistrate of Congjiang County, said that a number of co-operation agreements were signed in May between the Macao SAR Government, the Liaison Office of the Central People’s Government in the Macao SAR and the Congjiang County Government. These agreements confirm that Macao will assist to alleviate poverty in Congjiang County by means of education, MICE (meetings, incentives, conventions and exhibitions) and trade co-operation. Under this framework, the organisers of GMBPF gave Congjiang County good access to much facilitation. According to Mr Tu, being a large fair with a huge number of visitors, GMBPF created a sound platform for Mainland China’s enterprises to enter the Macao market, giving local residents and visitors the opportunity to learn about quality farm products from Congjiang. The collaboration and exchange between enterprises from the two cities also improved significantly. Looking ahead, he believes that participation at this year’s GMBPF is only the beginning of the co-operation between Congjiang and Macao. He plans to return once again with his delegation in October to participate in the 23rd Macao International Trade and Investment Fair (MIF), bringing more products from his hometown to Macao.

Following on from 2018GMBPF, all exhibitor information and product photos are available online for long-term promotion. If you want to find your favourite merchants and products, you can browse the GMBPF official website: www.guangdongmacaofair.com. 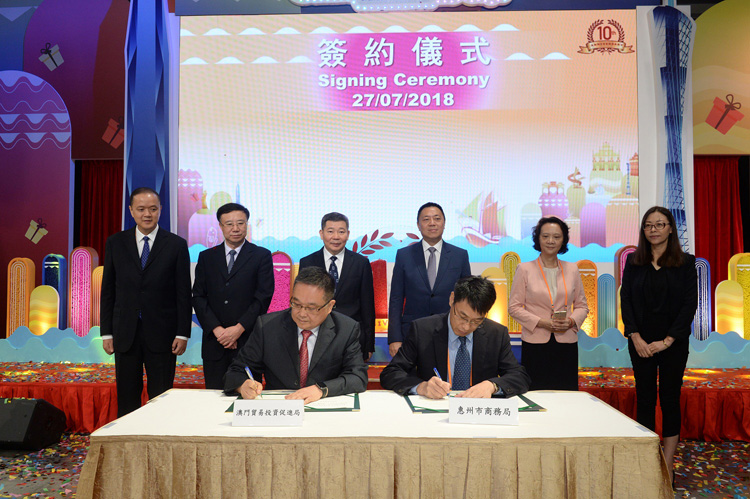 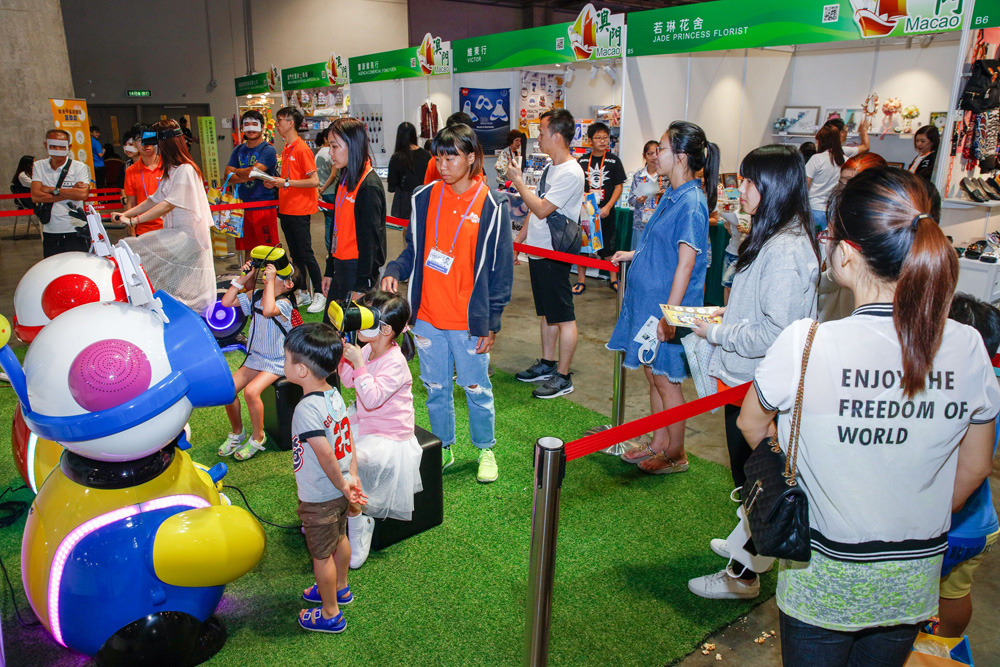 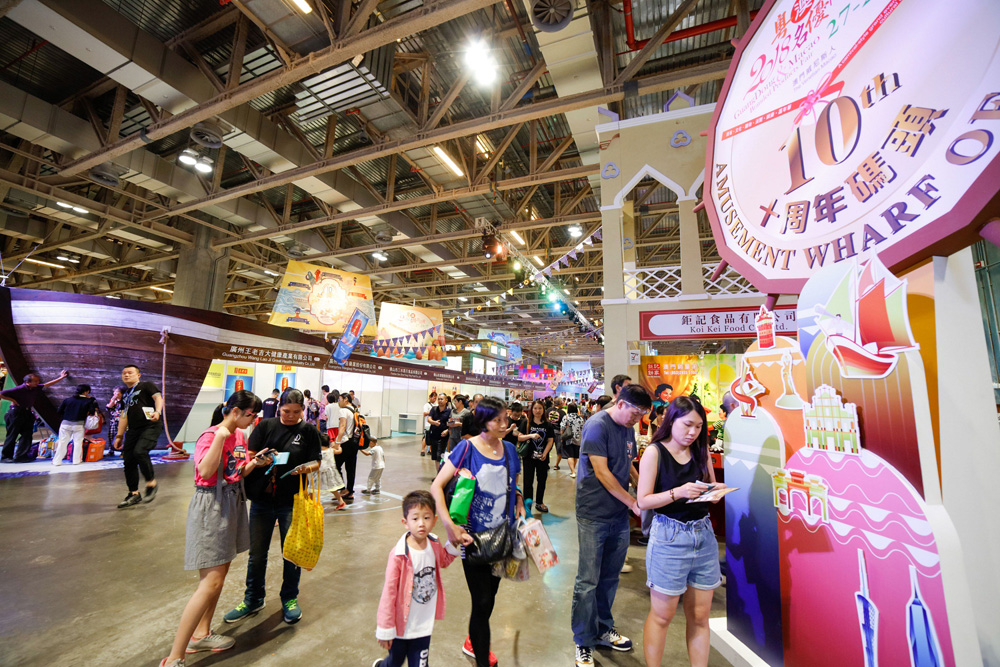 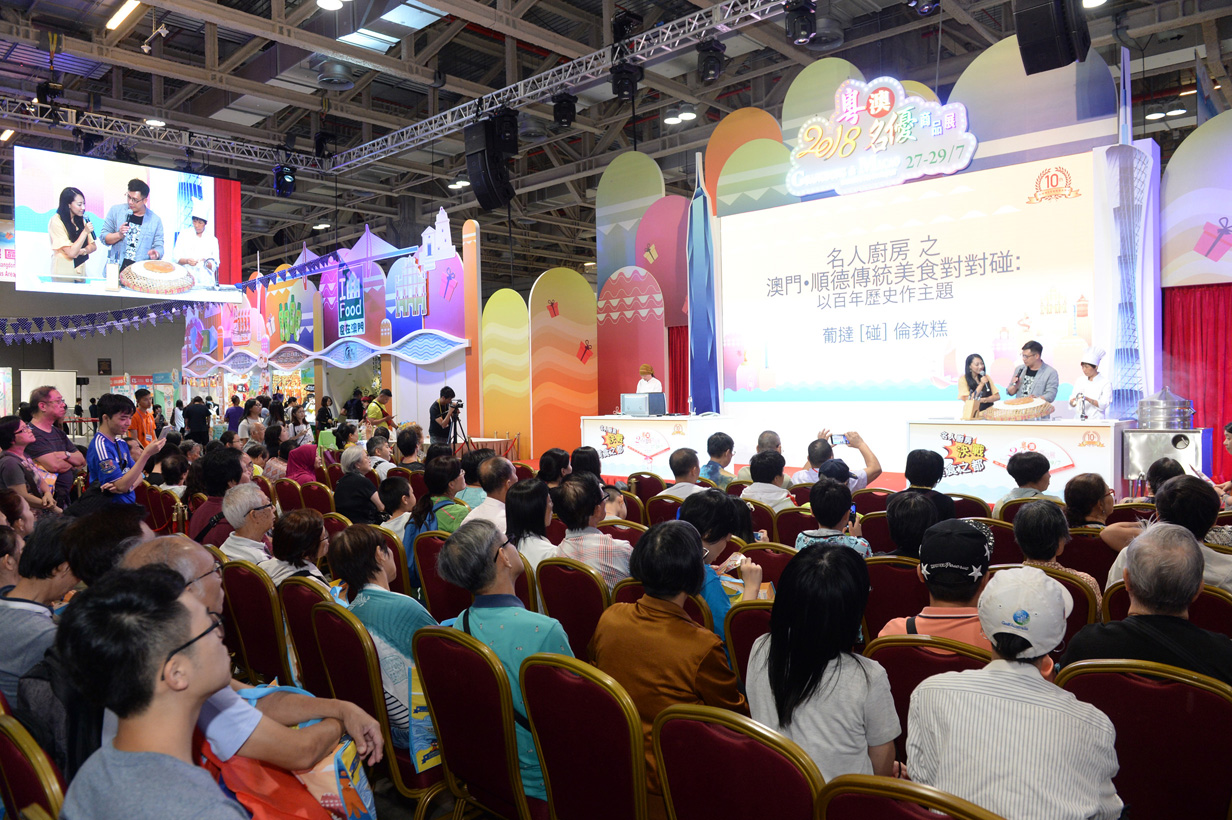 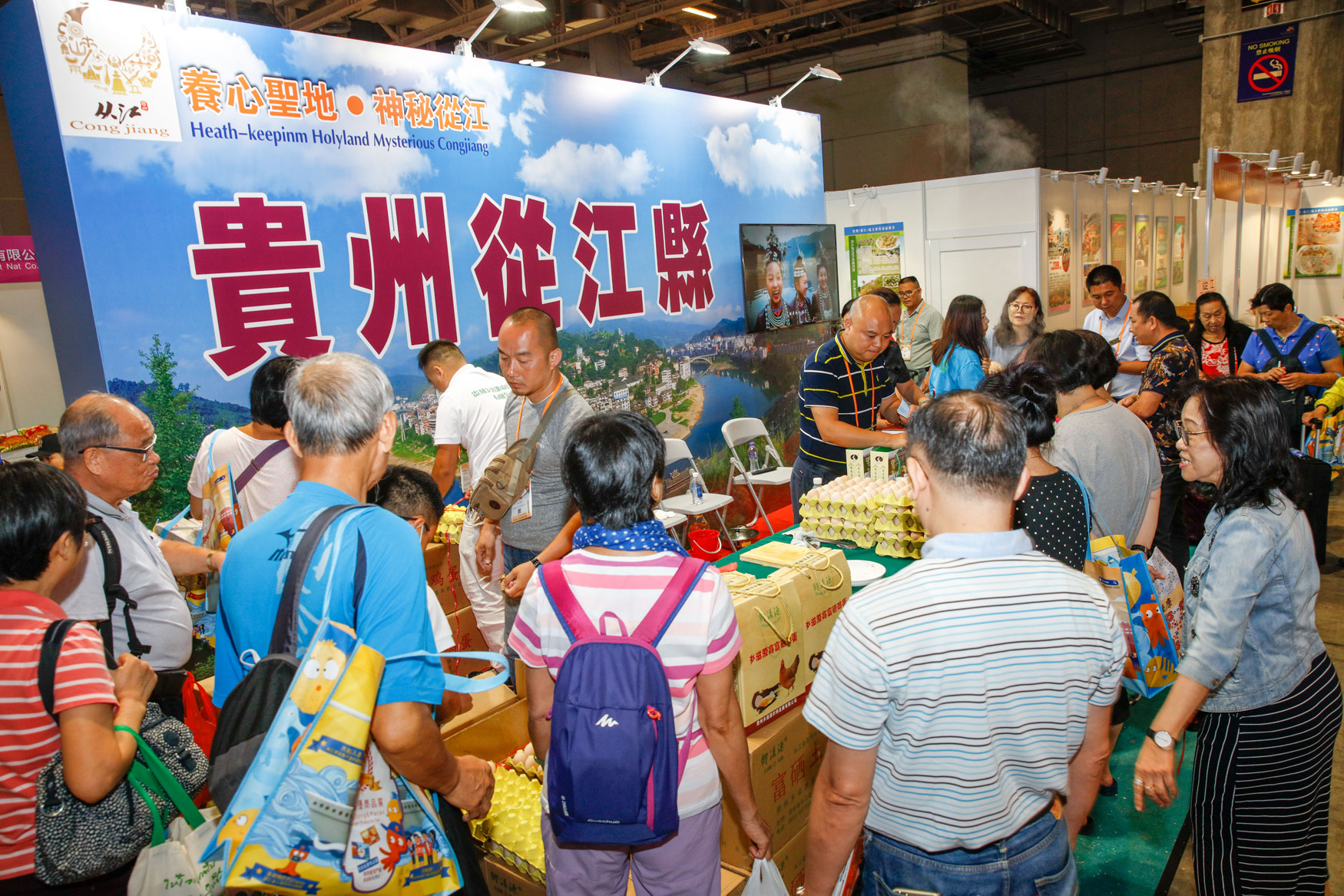 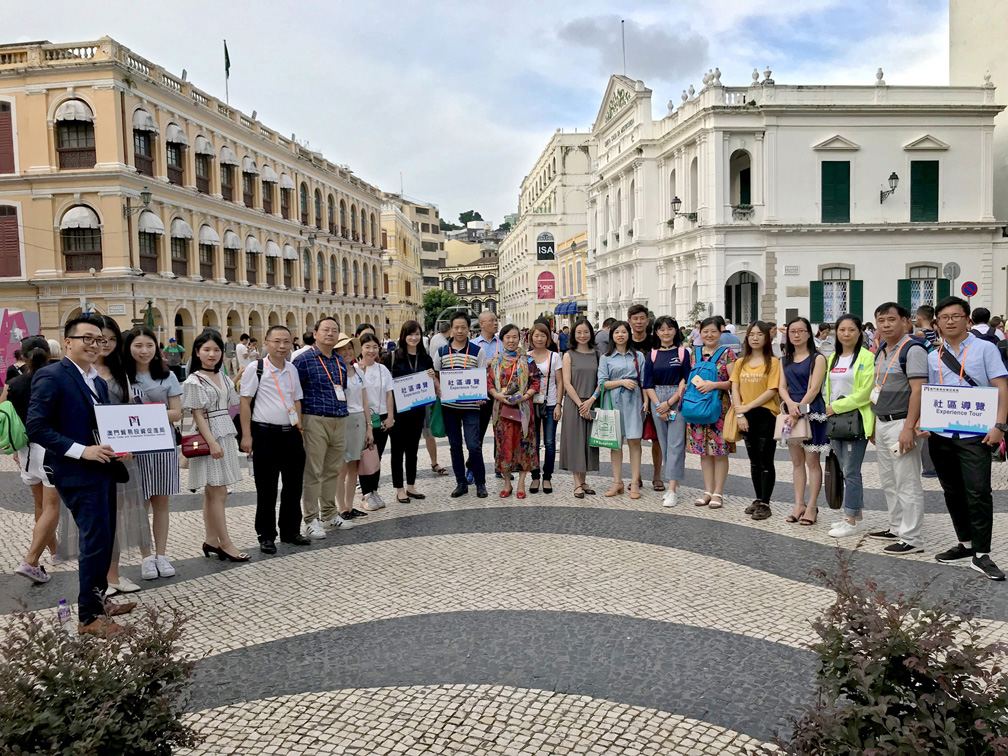 Guided tours were arranged for exhibitors to explore local neighbourhoods 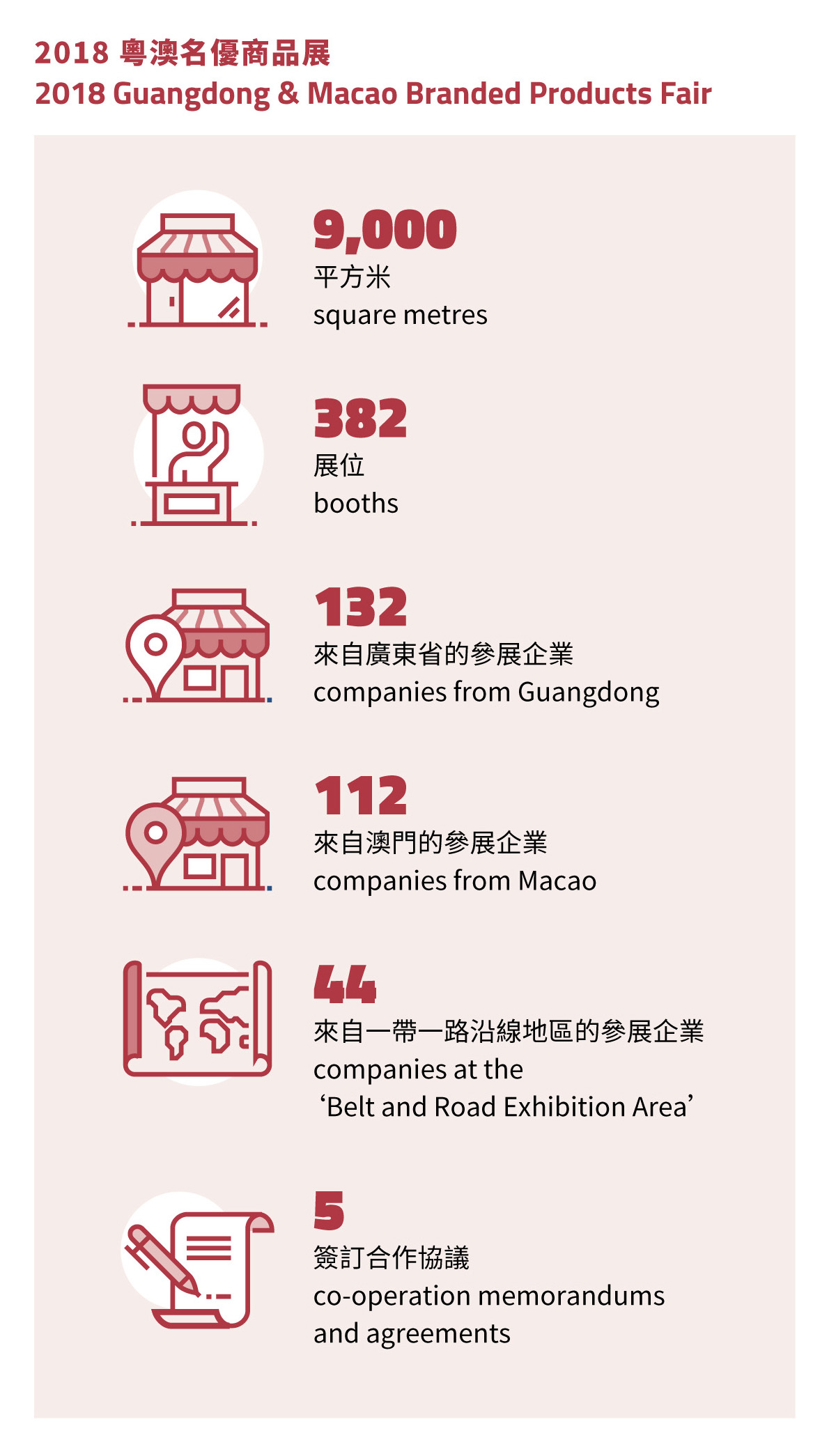