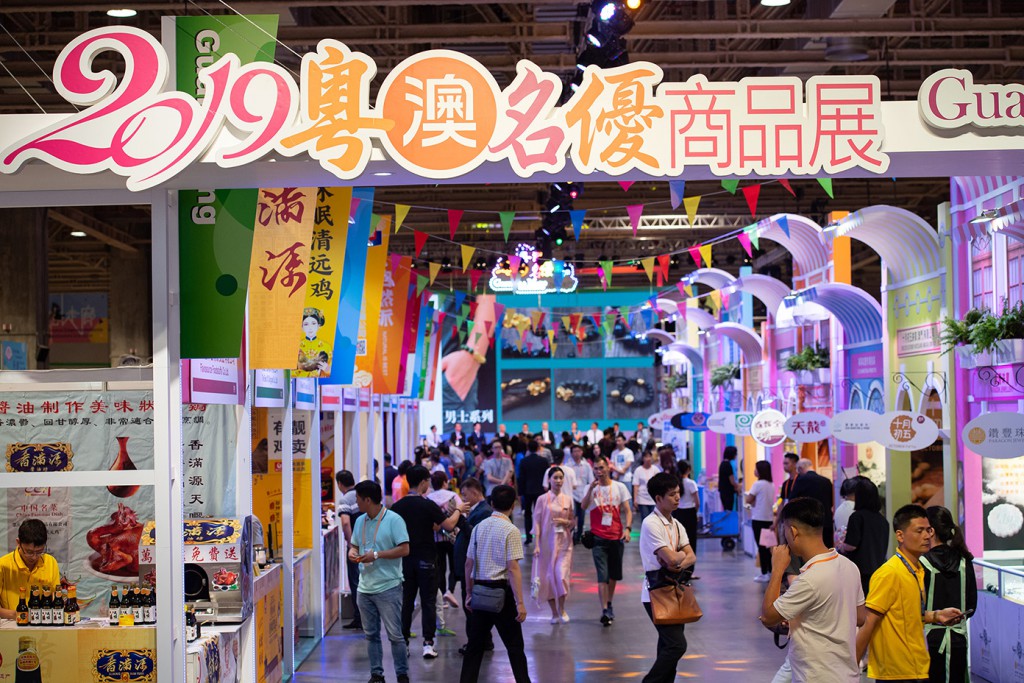 The Guangdong & Macao Branded Products Fair 2019 (2019GMBPF) was held at The Venetian Macao from 26 to 28 July. The event was jointly organised by the Macao Trade and Investment Promotion Institute (IPIM) and the Department of Commerce of Guangdong Province.

The three-day fair attracted a large number of Macao residents and visitors. Most exhibitors reported good sales, while those attending expressed satisfaction with the products being offered.

The 2019 event introduced The Power of Greater Bay Area Youth – Young Entrepreneurs Area and the Seniors Exhibition Area. A Thailand Pavilion was set up in the “Belt and Road” Exhibition Area for the first time. Various exhibition areas displayed diverse offerings and broadened the function of 2019GMBPF as an occasion for doing business.

It was the 11th edition of the GMBPF this year, which had more booths than previous fairs: 175 in the Guangdong Exhibition Area, and 102 in the Macao Featured Products Area. There were also exhibitors from Thailand, Indonesia, Myanmar and Malaysia, jointly fostering economic co-operation and trade among Guangdong, Macao and Southeast Asia.

During the fair, the Roundtable Conference of Guangdong-Hong Kong-Macao Greater Bay Area Commercial Organisations was held, allowing commercial institutions from all 11 cities in the area to discuss how to create fresh business opportunities by using the advantages provided by the commercial environment of Macao and the Portuguese-speaking Countries after the launch of the “Outline Development Plan for the Guangdong-Hong Kong-Macao Greater Bay Area”.

The Exhibition Area of Congjiang County of Guizhou Province also retuned this year to promote Congjiang’s investment environment and signature products, taking its cue from the “Agreement on Promoting Foreign Trade and Development via MICE Industry” signed by representatives of IPIM and Congjiang County. There were check-in points, virtual reality games, lucky draws, and singing and dancing performances. One of the highlights was the Guangdong-Hong Kong-Macao Junior Chefs Culinary Competition, a stage for junior chefs to showcase their craftsmanship.

This year’s GMBPF continued to be hosted concurrently with the Macao Franchise Expo 2019 (2019MFE), furthering the resource sharing and synergy between the two events. The organiser also arranged guided tours for exhibitors so they could explore Macao’s neighbourhoods, with a view to boosting the local community economy, sharing business with small and medium enterprises, and giving the visitors a better idea of the investment environment in the city. 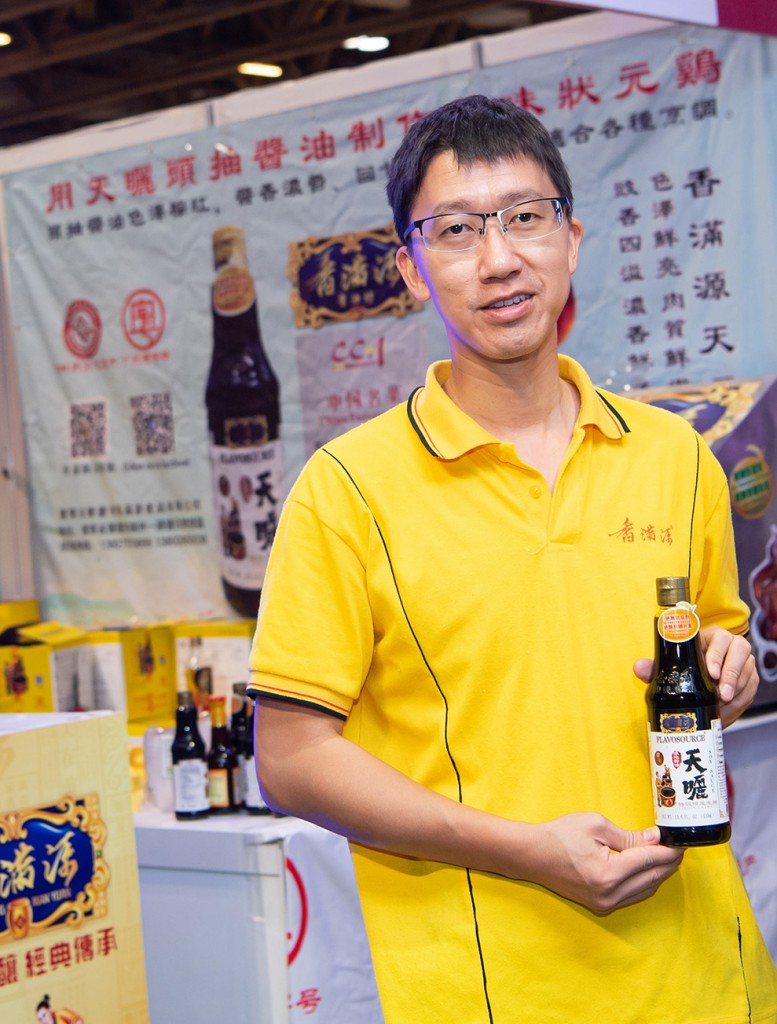 “They have been coming back to the fair for our products, so we think that the GMBPF is beneficial to the promotion of our brand.”Mr Calvin Liang, Marketing Manager of Flavosource Foodstuffs Co. Ltd.

Flavosource Foodstuffs Co. Ltd., a company in the city of Zhaoqing in Guangdong, took part in the GMBPF for eight years in a row. Mr Calvin Liang, Marketing Manager of Flavosource Foodstuffs Co. Ltd. said his company had received positive feedback from citizens ever since it first exhibited there. “They have been coming back to the fair for our products, so we think that the GMBPF is beneficial to the promotion of our brand,” Mr Liang said.

The main products of Flavosource Foodstuffs include soy sauce, oyster sauce and other sauces customarily used in Chinese cuisine. Mr Liang said the annual GMBPF is the best chance for his company to show its products to people in Macao, those products being as yet unavailable in the Macao retail market.

“We intend to introduce a cooking stove for Macao restaurants, and we will try to launch a domestic version of the stove in a size similar to a microwave for general households,” Mr Liang told Macao Image. The company showed a cooking stove it has developed, with a view to finding agents to distribute its products in Macao’s supermarkets.

“After the establishment of the Guangdong-Hong Kong-Macao Greater Bay Area, there are more visitors from Hong Kong and Macao coming to Zhaoqing, and it’s easier for us to come to Macao for business purposes,” Mr Liang said. “This really helps a lot in promoting our brand in these cities.”

He said he considered the GMBPF a symbol of branded quality, and that exhibiting at the GMBPF a good way to promote the products his company makes. “Tourists and residents will approve the quality of our products when we can display them here at the fair,” he said.

Mr Liang said his company would keep exhibiting at the GMBPF and supporting the fair, bringing along original, high-quality and novel products. 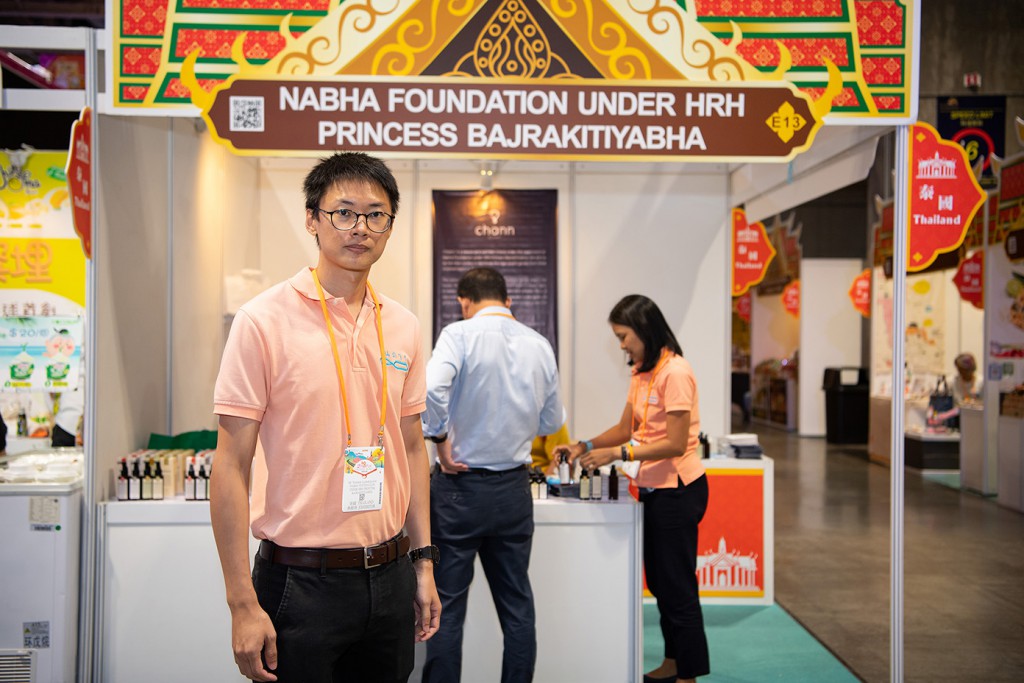 “We believe that the fair provides us an international platform, so that more people know us, and we will have more opportunities to start co-operation with other” Executive Assistant to the Vice-President of the Chann by Nabha Foundation companies.

Among those taking part in the GMBPF for the first time was Mr Nuttapon Laohakunwetit, the Executive Assistant to the Vice-President of the Chann by Nabha Foundation from Thailand. Mr Laohakunwetit said the foundation was set up three years ago to sell high-quality goods made by disadvantaged people. Its presence at the fair was the foundation’s first expedition outside Thailand.
“We believe that the fair provides us an international platform, so that more people know us, and we will have more opportunities to start co-operation with other companies,” Mr Laohakunwetit told Macao Image.

“We’ve heard that MFE did successful matching for companies in the past, even for newly set up businesses,” Mr Laohakunwetit said. That success in business matching encouraged the Chann by Nabha Foundation to press on with broadening its scope, he said.
The 2020GMBPF and 2020MFE will be concurrently held from 31 July to 2 August 2020.