Organised by the Macao Special Administrative Region (SAR) Government and the State-owned Assets Supervision and Administration Commission of the State Council (SASAC), co-ordinated by the Secretariat for Economy and Finance of Macao SAR, and supported by the Liaison Office of the Central People’s Government in the Macao SAR, the “2019 Summit on Chinese Central SOEs Supporting Macao as Co-operation Platform between China and Portuguese-speaking Countries” was held on 16 October in Macao.

More than 400 representatives from Central Government’s ministries and departments, state-owned enterprises (SOEs), Portuguese-speaking Countries enterprises, Macao companies and commercial associations attended the summit. A total of 11 agreements on co-operation in infrastructure, research and talent training were signed among departments and organisations from Mainland China, Portuguese-speaking Countries (PSC) and Macao.

According to Mr Hao, the state-owned enterprises will fully utilise Macao’s China-PSC platform to deepen and reach co-operations with “Belt and Road” countries and regions; based on Macao’s economic diversification and development, make good use of Macao’s featured industries’ competitiveness to intensify and build new collaborations in the development the core technology engine of the Guangdong-Hong Kong-Macao Greater Bay Area; give full play to the upper hand of state-owned enterprises and enhance Macao’s long-term prosperity and stability with fortified and new co-operation.

Mr Fu mentioned in his address that the China-PSC platform is a significant bridge for Macao to demonstrate its competitive edges and strengthen international economic and trade co-operation. It is also an important stage for Mainland China, Macao and Portuguese-speaking Countries to jointly construct the “Belt and Road”, a crucial leverage for Macao to integrate itself in the country’s momentum and foster its moderate diversification of economic development. State-owned enterprises are undoubtedly the cornerstones for the economic collaboration between China and Portuguese-speaking Countries and the construction of China-PSC platform.

In his speech, Mr Monteiro expressed his hope to intensify the collaboration in trade and energy resources between Mainland China and Cape Verde by utilising Macao’s China-PSC platform. Planning to build a maritime economic co-operation zone in the future, Cape Verde aims to become China’s strategic co-operation partner in Southern Africa and Central Pacific, and Macao’s important partner.

According to Mr Liu, China Development Bank will give full play to its competitiveness to provide multi-faceted support for state-owned enterprises to join the development of Macao’s China-PSC platform and the building of new grounds of bi-lateral opening up.

The theme of the Summit was “Exploring New Opportunities in the New Era of Co-operation”. Three panel sessions were held at the opening ceremony, with participants enthusiastically exchanging views on its specific topics, namely: “Central Enterprises ‘+Macao’ Collaboration for Highly Effective Participation in Infrastructure Development in PSCs and ‘Belt and Road’ Countries”; “Harness Macao’s Featured Finance to Support Central Enterprises’ Growth in PSCs”; and “Craft the Greater Bay Area Innovation Engine with Organic Combination of Macao’s and Central Enterprises’ Competitive Edges”. 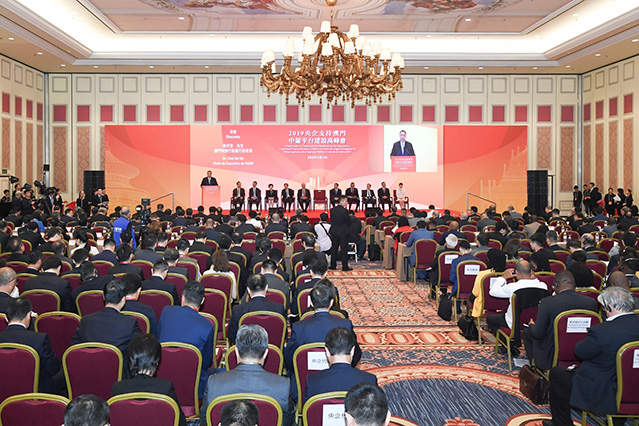