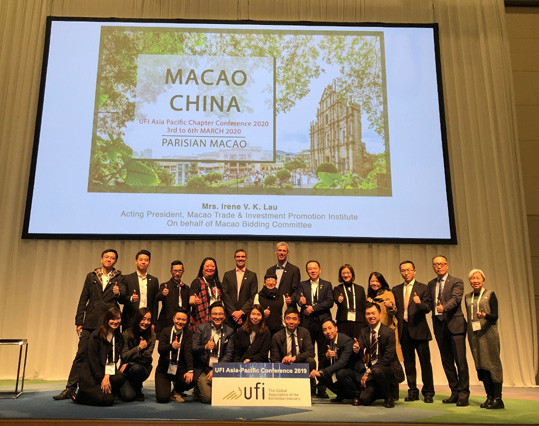 The 2020 edition of the UFI Asia-Pacific Conference will be held in Macao from 3 to 6 March next year, in what would be the second time for the city to host this event. Over the past 14 years, the UFI Asia-Pacific Conference – an annual event held in different regions across Asia – has become one of the exhibition industry’s most important gatherings.

The Macao Trade and Investment Promotion Institute (IPIM) collaborated with the city’s meetings, incentives, conventions and exhibitions (MICE) sector in preparing the bid to host the UFI Asia-Pacific Conference 2020. According to IPIM, the conference organiser chose Macao for several reasons, in particular the qualitative development of the city’s MICE industry over the last decade.

“We are excited about the opportunity to go to Macao next year. Everyone attending the conference will be able to experience first-hand the impact the new Hong Kong-Zhuhai-Macao Bridge is having,” said Mark Cochrane, UFI Regional Manager Asia-Pacific.