The Macao Special Administrative Region Five-Year Development Plan (2016-2020), published in 2017, says one strategy Macao should adopt is “to expedite the development of a smart city and to facilitate the integration of industries and the Internet”. This is considered crucial to enhancing Macao’s competitiveness and the city’s collaboration with its neighbours.

As soon as the Five-Year Development Plan was published, the Macao SAR Government began the in-depth study and analysis of what technologies were required to develop a smart city and which partners could help the Government obtain the necessary technical support. The Government decided to form a partnership with Alibaba Group and the partners signed the Framework Agreement of Strategic Co-operation on Smart City Development.

As the saying goes, Rome was not built in a day. Turning Macao into a smart city entails a well-laid plan and proper definition of objectives that suit the unique features and advantages of the city.
Macao University of Science and Technology Faculty of Information Technology Dean Zhang Du says the development of a smart city is far from being a simple, copy-and-paste process. “Macao has unique social, economic, geographical and political features and constraints,” Prof. Zhang tells Macao Image. “We have to identify solutions that fit the specific situation and circumstances of Macao, adopt those that are highly efficient and sustainable, and so generate economic prosperity and social wellbeing.”
Macao is “a city in transition”, Prof. Zhang says. The city is simultaneously enjoying yet enduring rapid economic growth and urban expansion. “Smart city initiatives afford Macao a new opportunity to start its next round of highly efficient and sustainable growth toward economic prosperity and social wellbeing. Helping improve the quality of life of Macao citizens is the single most important benefit of the smart city efforts,” he says.

Prof. Zhang believes Macao will be better able to compete globally if it becomes a smart city, which would enable it to “secure a top spot in rankings such as tourist destinations or most liveable cities in the world”, he says. He thinks Macao “will become a magnet attracting people and talents from all over the world”.

The Macao Government says the purpose of making Macao a smart city is to benefit its citizens. Its vision is of a liveable city that keeps pace with its partners round about in its degree of development and, through technology, enhances the social environment and meets the demands of its residents.
Smart City Alliance Association of Macau Director Alfred Wong believes the people of Macao will benefit in many ways from the application of the smart city concept, including its application in public administration and transport.
Mr Wong tells Macao Image. “With smart government, many processes can be completed in one stop. Some applications can be submitted through mobile devices.” Such intelligent approach has greatly shortened the duration of the whole procedure.
As for transport, he says developing a smart city can help sort out the traffic on the roads, making getting around more convenient. He says smart transport is about more than just route planning based on the current traffic condition. “It is for the Government to collect data on transport in the city and then predict future traffic conditions, which can allow the Government to make appropriate arrangements,” he says.
Mr Wong says Macao should first of all build a comprehensive legal framework for a smart city, and decide which laws and regulations must be changed to allow its development – such as the Personal Data Protection Act.

Collective Wisdom Policy Center Vice-president Andy Loi Man Keong says that data collection, circulation and analysis are essential to developing a smart city.
Mr Loi thinks the Government should analyse the big data it collects each year – such as the ages and origins of visitors – and let the sector use them in putting business plans into action.
But Mr Loi thinks the private sector should do more than just depending on Government-collected data. “The industry should go after a partnership, where the Government could consider subsidising businesses that are able to collect data, on the condition that the businesses have to share them with the Government,” he says. “On one hand, the Government doesn’t have to shoulder the whole burden. On the other, it still gets what it wants for administration enhancement.”
Mr Loi says the Government already supports some mobile applications. He thinks the Government can ask the operators of the applications to share the data they collect, such as the consumption behaviour of Macao people.

Making Macao a smart city is important for the tourism industry as well as the people of the city. University of Saint Joseph Visiting Professor Filipe Castro Soeiro says that as the World Centre of Tourism and Leisure policy envisages Macao becoming a draw for tourists and leisure-seekers from all over the globe, becoming a smart city will certainly benefit the tourism industry in Macao.

“The socio-cultural and economic dynamics of Macao have, down through the centuries, led to the creation of a society where people continue to view as harmonious, friendly and tolerant of cultural and ethnic differences, which can evolve, naturally, towards an open system and internationalisation,” he tells Macao Image.

Macao and neighbouring cities “will have to focus on a smart multifunctional specialisation approach based on comparative advantages,” Prof. Castro Soeiro says. “For example, Hong Kong is to play the world financial and legal centre (smart economy and smart governance). Shenzhen is to play China’s Silicon Valley because of its innovation and start-up culture (smart economy, smart living, smart people and smart mobility),” he says. “Macao and Zhuhai are set to reach higher value in leisure and tourism (smart economy and tourism, smart mobility and living).”

Macao will benefit from a “clear vision and an offering portfolio focusing on leisure and tourism’s higher-value services and experiences”, Prof. Castro Soeiro says. “Macao needs to develop a smart tourism-carrying-capacity system to support resources, services and operations management of the city.”

Prof. Castro Soeiro believes that by pursuing development and innovation policies co-ordinated at every level of government and co-ordinated with key stakeholders, “Macao will be able to co-create, design, develop and manage a top, distinctive leisure and tourism portfolio of experiences”. 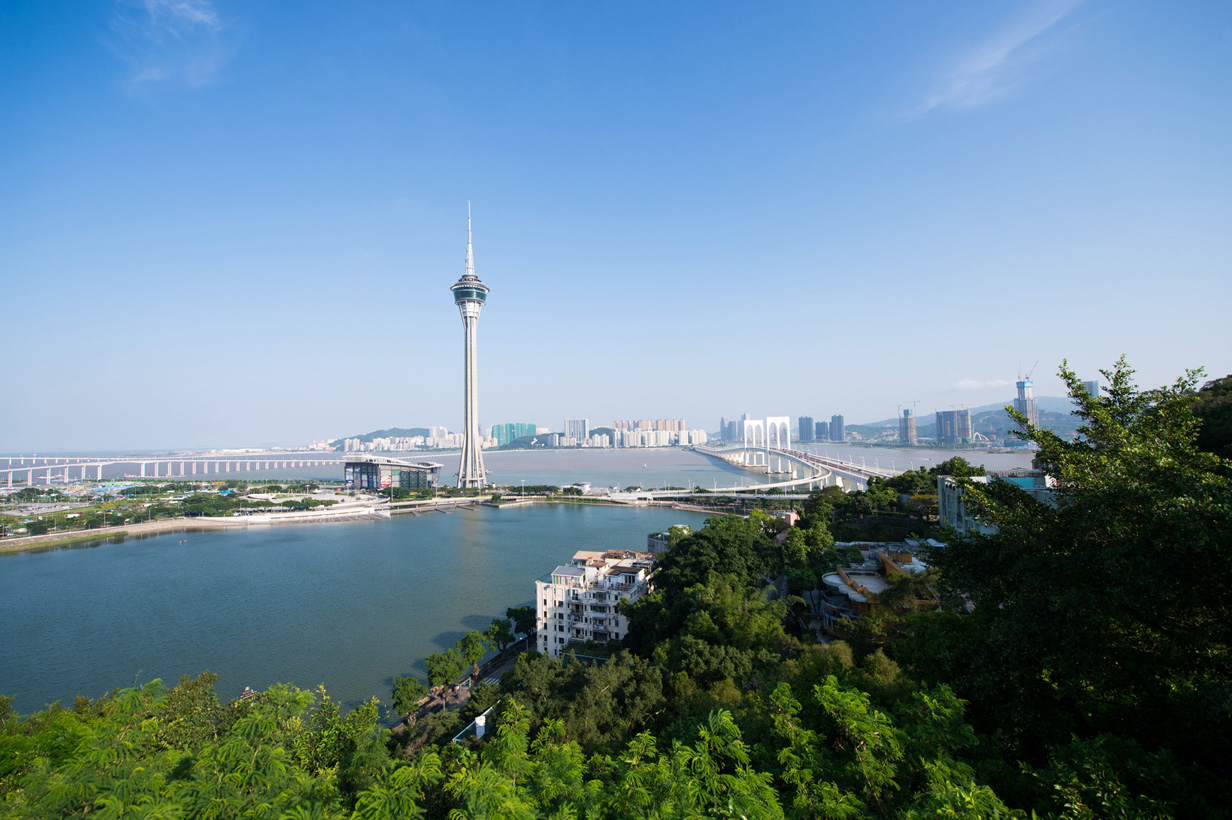 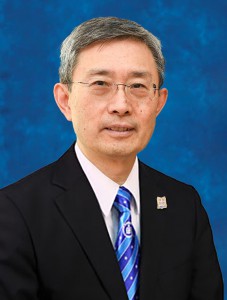 “Smart city initiatives afford Macao a new opportunity to start its next round of highly efficient and sustainable growth toward economic prosperity and social wellbeing.” Zhang Du, Dean of Macao University of Science and Technology Faculty of Information Technology 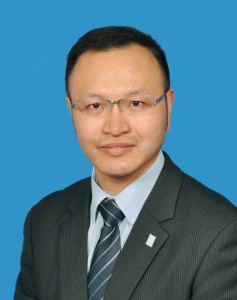 “With smart government, many processes can be completed in one stop. Some applications can be submitted through mobile devices.”Alfred Wong, Director of Smart City Alliance Association of Macau 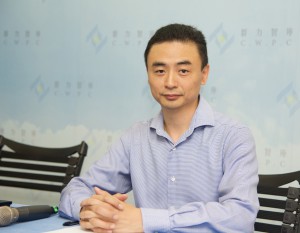 “The industry should go after a partnership, where the Government could consider subsidising businesses that are able to collect data, on the condition that the businesses have to share them with the Government.”Andy Loi, Vice-President of Collective Wisdom Policy Center 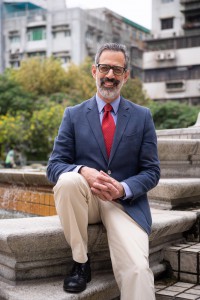 “Macao needs to develop a smart tourism‑carrying‑capacity system to support resources, services and operations management of the city.”Filipe Castro Soeiro, Visiting Professor at the University of Saint Joseph 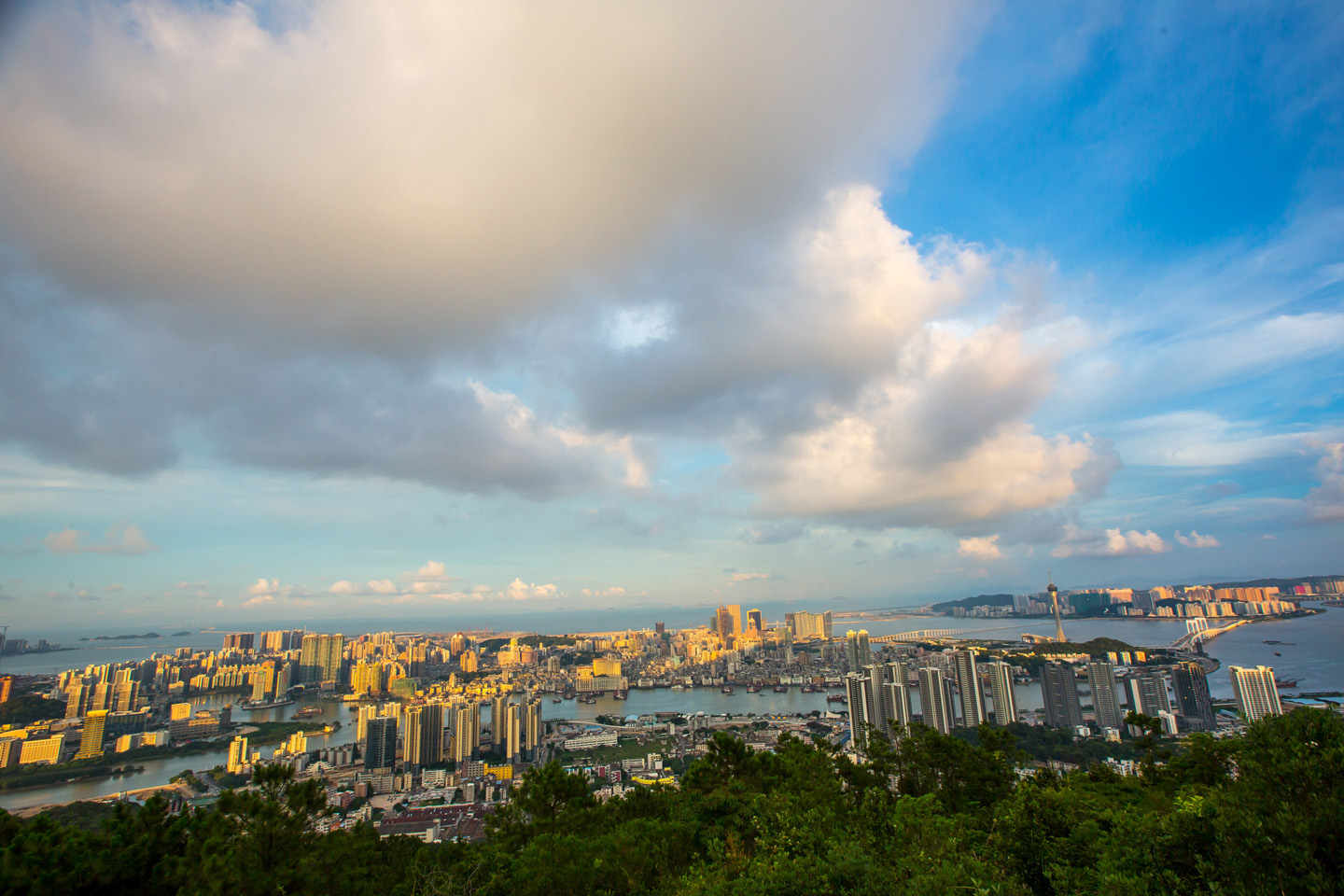 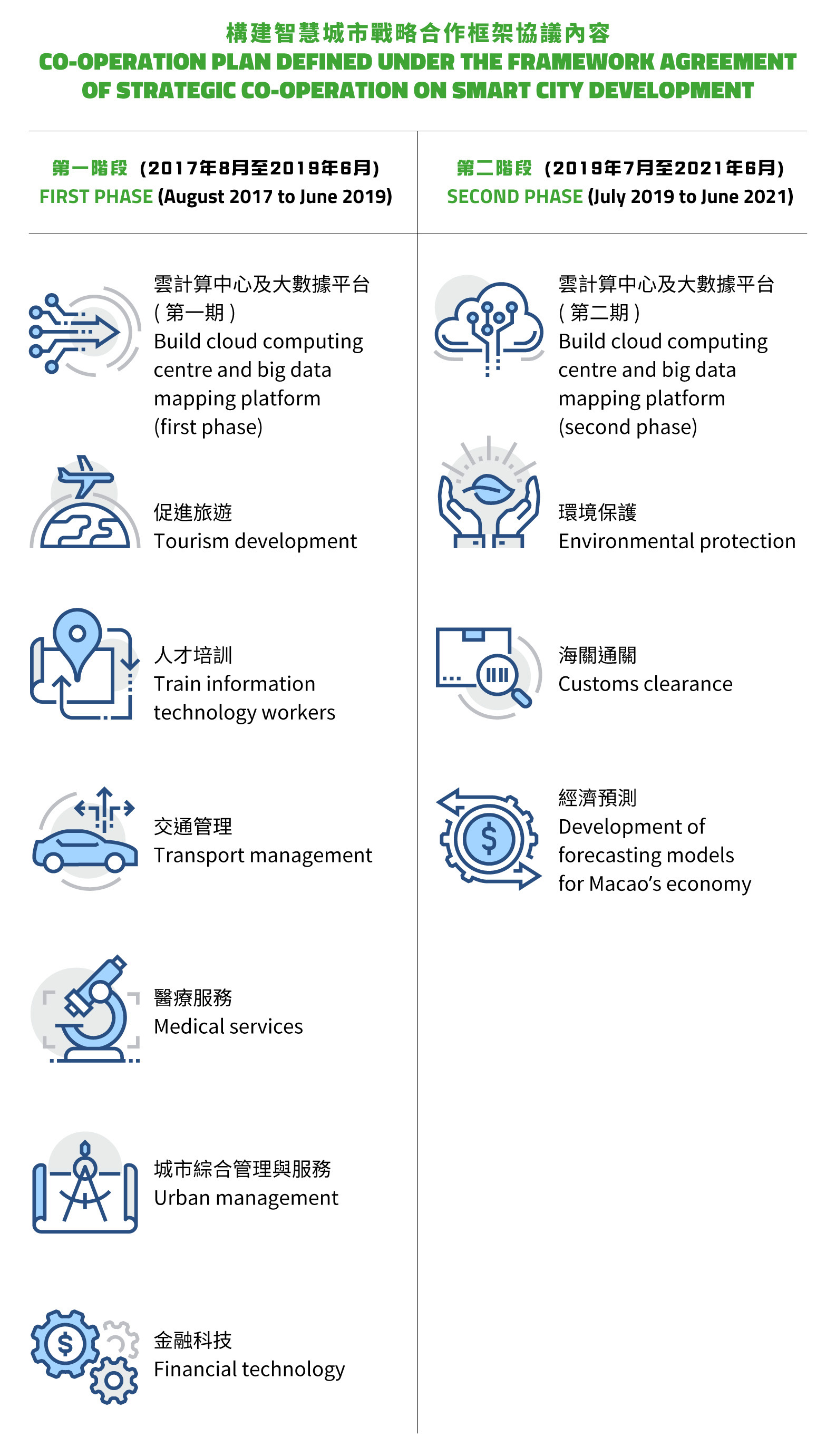 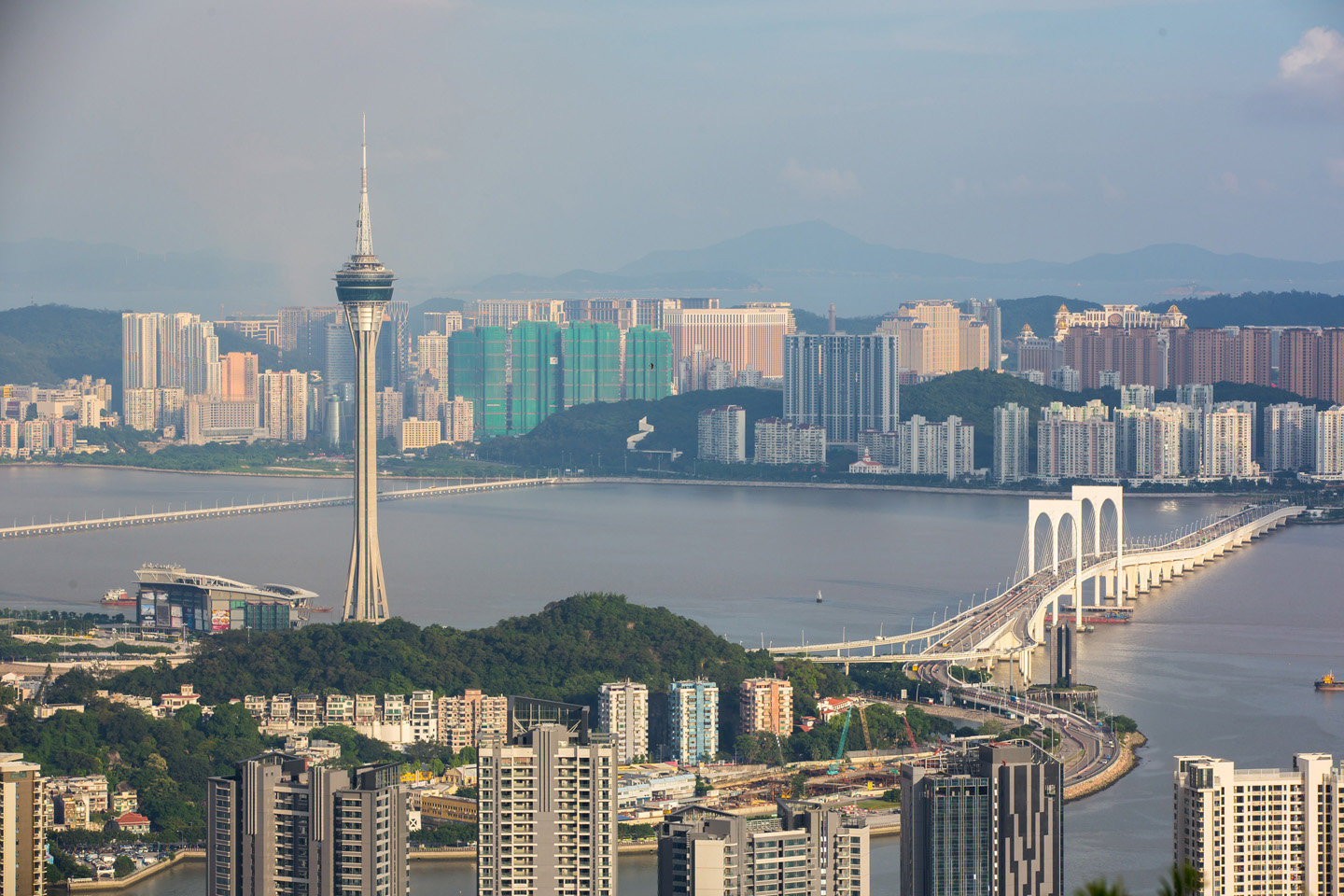