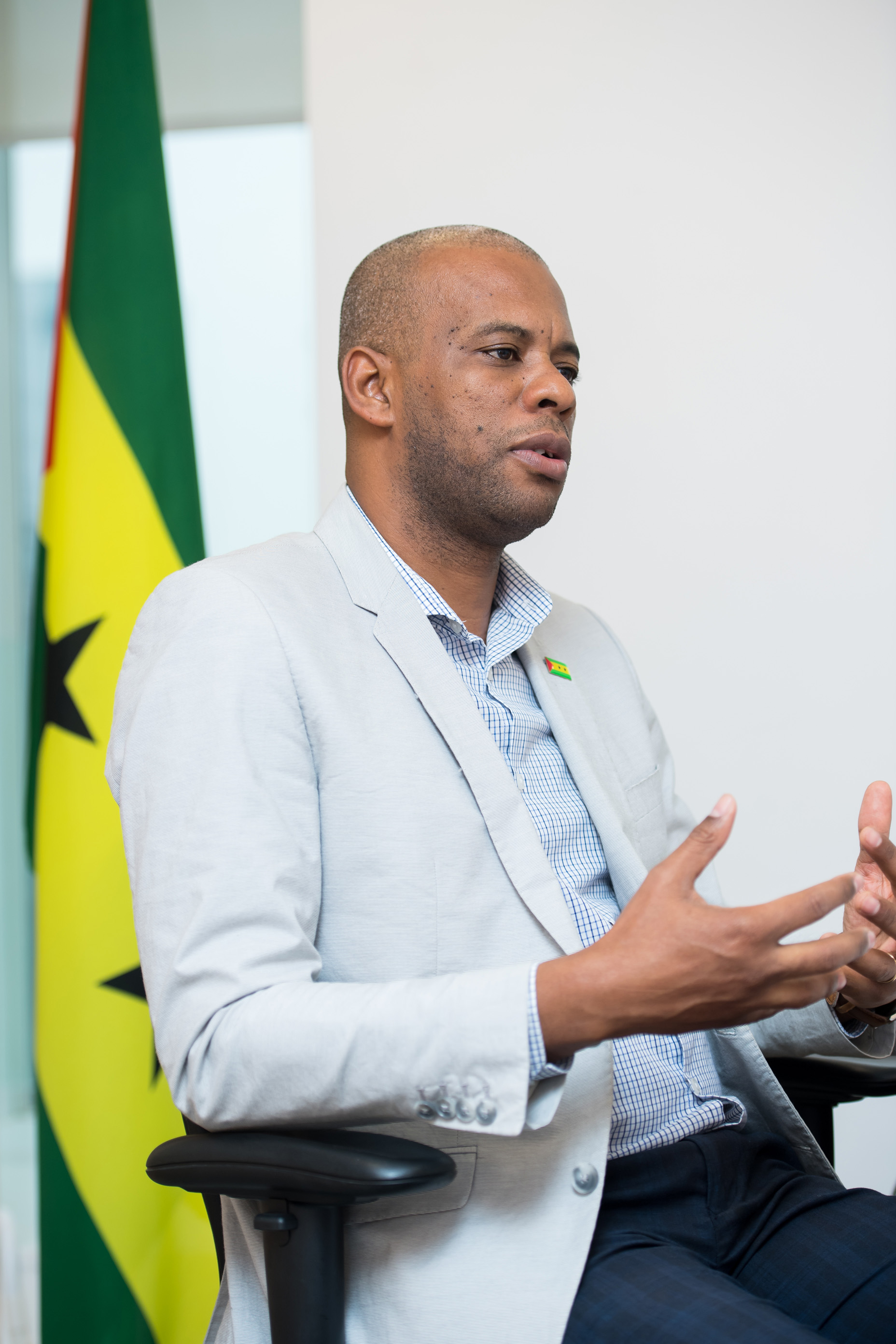 In December 2016, São Tomé and Príncipe resumed diplomatic ties with China, the African country is looking for a boost to its agenda for economic transformation, which revolves around creation of a deepwater
harbour and a new airport.

Gualter Vera Cruz, Representative of São Tomé and Príncipe in the Forum for Economic and Trade Co-operation between China and Portuguese-speaking Countries (Macao), discusses with Macao Image possible ways to develop further investment and trade relations.

It’s been about a year since São Tomé and Príncipe resumed diplomatic relations with China. Does the country already have something positive to show for it?

The country has potential, it might just still be untapped in several areas for di erent reasons. We have an exclusive economic maritime zone of more than 160,000 square kilometres. As such there are resources in this sector. e country has good conditions for tourism, namely via use of our sea resources. We do have the issue of hotel scarcity, however. Our very location is also a big plus. São Tomé and Príncipe is on the Equator, and very close to the Gulf of Guinea, where there is a potential consumer market of about 300 million people. 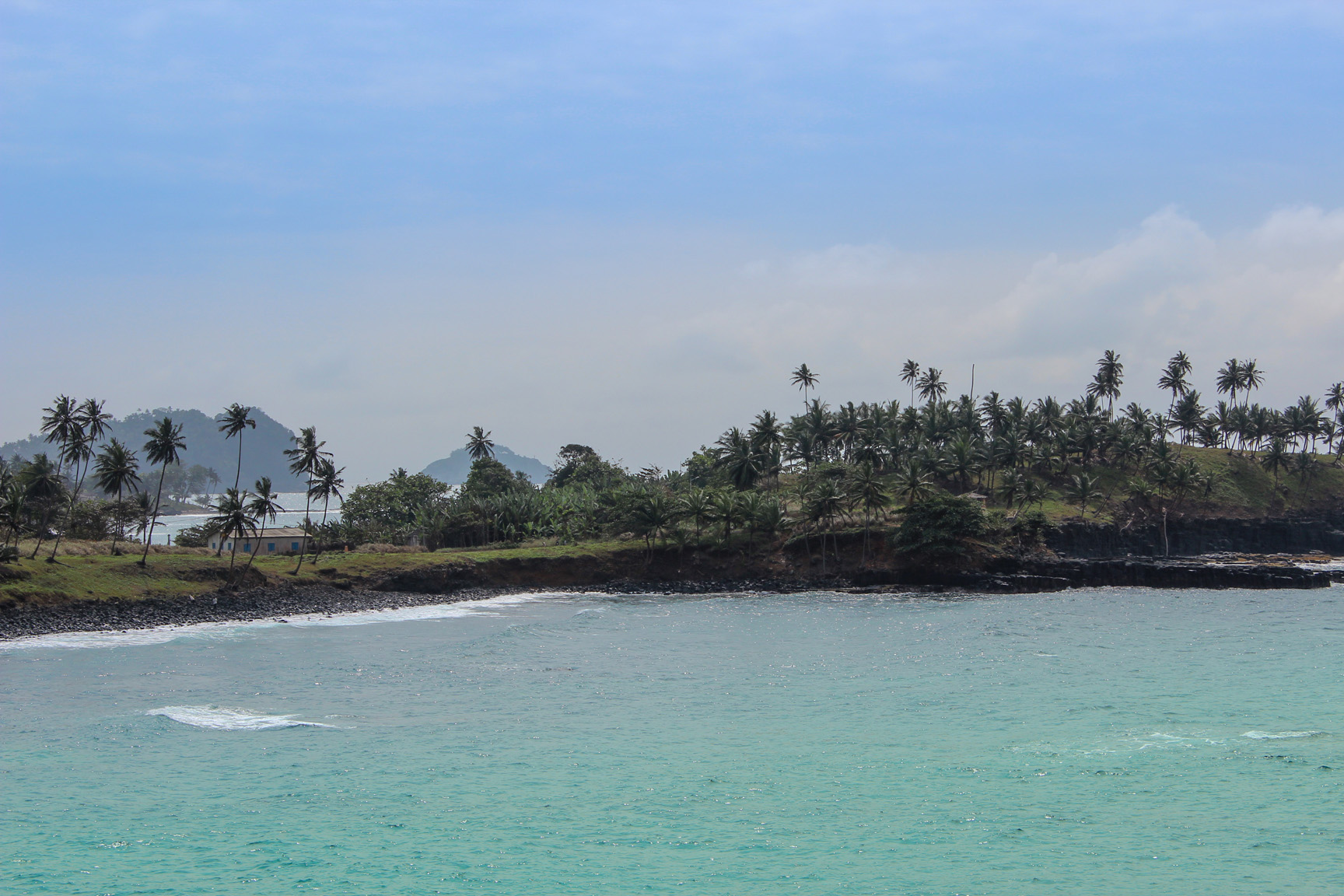 In order fully to explore its vast maritime zone, your country wants to build a deepwater harbour. In 2014, former president Manuel Pinto da Costa went to Beijing in search of investment for this project, estimated at more than US$500 million. Is there Chinese interest in this venture?

That’s all part of our transformation agenda, which also includes modernising our airport.

Those are the two essential cornerstones for our economy, in order to create good conditions to attract investors and develop the country. Now, we have made them [the projects] available to any interested investor. I believe there are already clear signs of interest for both the deepwater harbour and the airport. We have an airport but it needs to be modernised to keep up with our ambitions for São Tomé and Príncipe. e harbour, meanwhile, could propel us to that role as a base for economic expansion, which would allow us to bring in investors, not only with an eye on São Tomé and Príncipe but also on the African coast.

Are there already actual offers?

It is commonly said that in business silence is golden. But in fact we have had some interest. I know that things are sailing in the right direction, towards finding solutions that would allow us quickly to kick-start this process.

Looking at the airport modernisation project, how could it help tourism?

We have picked tourism as a fundamental building block of our economy, and we’re now laying down the foundations to make it happen. São Tomé and Príncipe has granted visa exemption to visitors from several countries, not only in Europe and the Americas but also in Asia, so that people can come and see with their own eyes our particular natural beauty. The Príncipe island autonomous region has been a Biosphere Reserve declared by UNESCO. So the country is open to all countries, all continents. But obviously we must decide which kind of tourism we want. We’re already working on a tourism blueprint. A new airport will help push us further ahead. 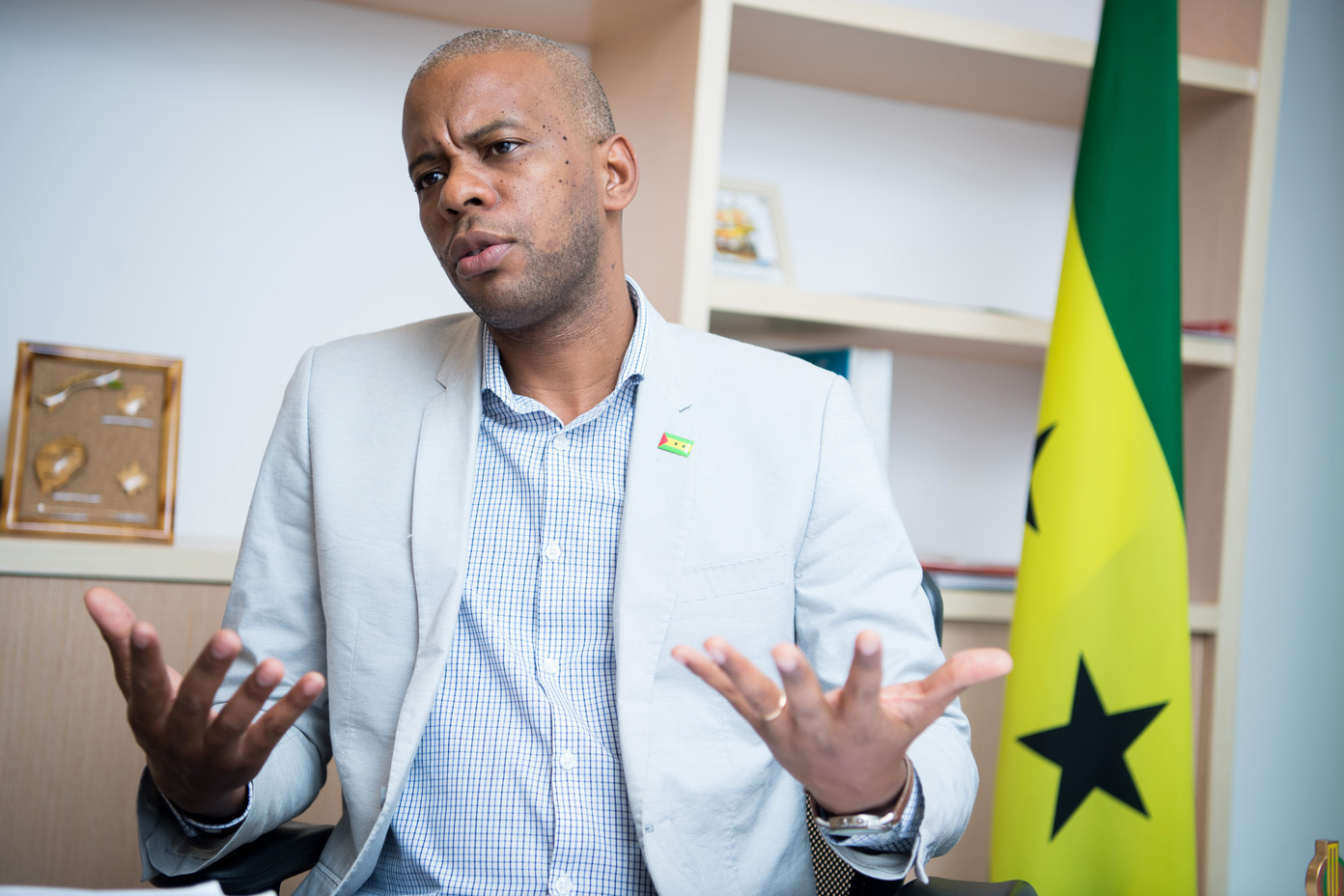 Regional weekend tourism is also a possibility, with a metropolis like Nigeria’s Lagos and its 20 million inhabitants so close.

That kind of tourism is already taking place. We don’t have exact figures but the trend for people visiting São Tomé and Príncipe is rising. If I’m not mistaken, we have already doubled what we used to have
in prior years. It’s clear that the work we are doing is paying off. It’s also clear that people are interested in what we have to offer.

So what has been the difference? Is it the visa exemption?

It has helped. All it takes is a look at the figures and you can tell. It’s not enough just to carry out promotion, shoot movies, teasers, but you must also get people to come and see with their own eyes. Travel writers who have come to São Tomé and Príncipe have given glowing reviews of our country’s beauty, our landscape, our culture. That’s not all [good reviews]. Also to our people, our way of making others welcome, and taking things, as we say, “leve-leve” – “easy easy”.

Yet it’s a beauty that must be protected and cannot handle mass tourism.

That’s why we’re working on a tourism blueprint for São Tomé and Príncipe. It will surely re ect all that we want from tourism. But right from the start I think that tourists can tell, from the country’s characteristics, the kind of tourism we are looking for. So I don’t think we will have many problems. Still, we are assessing all that needs to be done to prevent our country’s beauty from being damaged by tourism. Because that’s a resource, that’s what we are trying to promote, and that’s what we must preserve.

Speaking of resources, São Tomé and Príncipe has already sent about 90 university students to Mainland China in 2017. Can China help your country to produce qualified professionals?

It can. The country is investing in its human resources to keep up with all the areas we are trying to develop. But it won’t just be China, there will also be other countries, depending on which particular area of development we are nurturing. China is a good partner in that aspect and honestly it has been so for a while now. Several of our o cials were in China and they have since been playing a role in developing our economy and making their contribution to the country.

São Tomé and Príncipe has invested a lot on water and electricity supply, services essential also in order to attract investment. Are there still opportunities in these two areas?

At this moment electricity supply already covers 95 percent of the country. As you’ve said, we have invested a lot in this area because, if we are interested in having people come and invest in São Tomé and Príncipe, then we need to create a set of [suitable] conditions. at’s what we are doing. We want to provide people who wish to invest in our country, stability and trust. We have done that, not only when it comes to energy, but also on some tax-related issues. Water supply is also being improved. If truth be told we are at a very good level, even compared to other African countries, many of which have much better resources than we do. I believe there will always be room for more investors. São Tomé and Príncipe is open and will surely assess any proposal according to its interests. 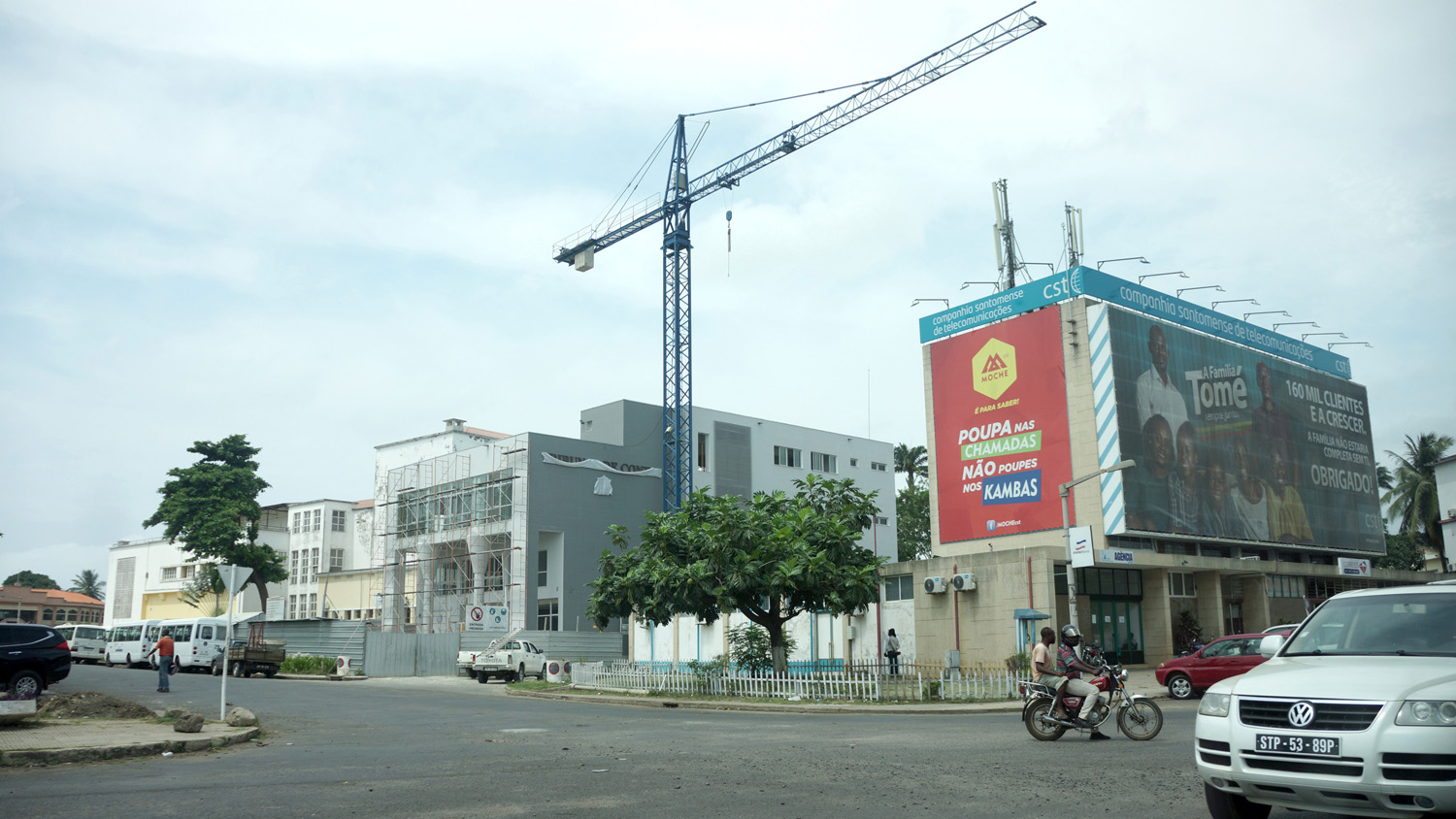 You joined the Permanent Secretariat of the Forum for Economic and Trade Co-operation between China and Portuguese-speaking Countries (Macao) last year, so you’ve already had a chance to learn more about the city and its dominant industry, gambling. Cape Verde has already legalised casino operations. Is São Tomé and Príncipe also thinking about it?

That has been a regular question here in Macao. Let’s see, we do have a legal framework on gambling, which already takes place in some São Tomé and Príncipe hotels, it’s just not on the scale of Macao. It will probably not be similar to what’s being done in Cape Verde. Now, going back to our location, our proximity to 300 million potential consumers. When you look at it, it all depends on what kind of project comes up. If investors come forward, surely we won’t turn them down, because investment creates jobs, so it’s all about us analysing what comes up.

Agriculture remains São Tomé and Príncipe’s biggest economic sector. Will the country’s relationship with China also help in this area?

How could it not help? China is the second biggest economy in the world, with cutting- edge technology and a group of specialists on agriculture. Of course it will help, not only regarding introducing technology into agriculture, new techniques, new ways to approach agriculture, but also even regarding the structure of the agricultural sector.

Could China become an even more attractive market for São Tomé and Príncipe’s agricultural products?

It’s attractive indeed. That’s why we have Forum Macao, which facilitates that connection with Mainland China. ere is the Portuguese-speaking Countries Food Products Exhibition Centre in Macao, as well as exhibition areas in other municipalities in Mainland China. The groundwork is done for that trade to grow, not only from the opportunities the government might promote, but also from the relationship between business people from São Tomé and Príncipe, Macao, and Mainland China.

We have already began to work on this; there has been an initial approach. I have already visited several existing exhibition areas. We shall soon place some of our products there. We’re just waiting for the paperwork to make it happen as soon as possible.