Guangdong Accelerates the Transformation into a Strong Competitor in Foreign Trade and Economy – with Last Year’s Total Imports and Exports Amounted to 7.14 Trillion Yuan

Despite the complex economic environment wherein both risks and challenges are rising at home and abroad, Guangdong Province has made every effort to stabilise foreign trade and foreign investment with significantly improved quality and efficiency. Guangdong is accelerating its pace to transform from a huge supplier into a competitive province in foreign trade. On the morning of 14 January, the “Report on the Work of the Government” (hereafter referred to as “the Report”) submitted at the Third Session of the Thirteenth National People’s Congress in Guangdong revealed that the total foreign trade volume of Guangdong in 2019 reached 7.14 trillion yuan. The total exports went as high as 4.34 trillion yuan, which showed an increase of 1.6%; the actual use of foreign capital was 150 billion yuan, demonstrating a 3.5% increase.

“The survival of foreign trade companies depends on export orders. This saying shows that competing for orders and expanding diversified markets play a very important part in business development.” said Mr Zheng Jianrong, Director of Department of Commerce of Guangdong Province. Guangdong has built close relationships with key markets along “the Belt and Road” initiative such as Vietnam, Malaysia and Poland. It also hosts 34 Guangdong product exhibitions in 22 countries and regions, demonstrating a further optimised structure of trade market.

The Report showed that last year, Guangdong’s imports from and exports to EU and ASEAN increased by 10.7% and 4.9% respectively; total imports and exports from/ to countries along the “Belt and Road” went up by 4.7%.

Mr Bai Ming is the Vice Director of International Market Research Institute, Chinese Academy of International Trade and Economic Cooperation. In his opinion, the significant improvement in the quality and efficiency of foreign trade has benefited from Guangdong’s early planning of industrial transformation and upgrade. “As a manufacturing centre in the world, Guangdong started its transformation and upgrade at a very early stage, which resulted in consolidated industrial foundation for foreign trade upgrading.” With the improvement of Sino-US economic and trade relations, Guangdong now faces more opportunities for foreign trade development, and high-tech products, in particular, have great potential to open up a larger international market.

The Report showed that the number of projects with actual investment exceeding US $ 100 million in Guangdong increased by 19.4% last year. This is a result of Guangdong’s effective implementation of the negative list of foreign investment and the “10-point Guangdong Plan”, further reducing market access restrictions, creating a more attractive investment environment with better land resources guarantee and manpower provision.

In recent years, Guangdong Province has taken the lead to establish a direct contact mechanism to multinational companies, enhance and craft investment platforms such as the Guangdong-Europe and Guangdong-US Investment Co-operation Exchange Meetings, vigorously introducing high-quality foreign-invested projects in the fields of biomedicine, communication equipment manufacturing, scientific and technological achievements transformation services, further optimising the use of foreign investment structures. Statistics from the Department of Commerce showed that the first 11 months of 2019, the foreign investment in actual use of high-tech industry amounted to 30.25 billion Yuan, accounting for 21.2% of the entire province.

In the past year, the Guangdong Free Trade Pilot Zone’s negative list of Hong Kong and Macao cross-border service trade was subsumed under the newly signed supplementary agreement to CEPA on trade in service. 160 more public services have been launched and synchronised in different cities of the Greater Bay Area, which significantly enhanced cross-border trade facilitation.

“In the next step, we will enrich pre-establishment national treatment for healthy foreign investments with negative list management system, promoting the opening-up of manufacturing, service industries and agriculture, while easing market access measures in education, medical care and housekeeping areas.” Zheng Jianrong said, Guangdong will enhance the province-led direct contact mechanism to multinational companies, accelerating the implementation of a number of large foreign investment projects.

Guangdong, Hong Kong and Macao join hands in setting up the “Economic and Trade Platform” to create business opportunities

The Department of Commerce of Guangdong Province, the Hong Kong Trade Development Council (HKTDC) and the Macao Trade and Investment Promotion Institute (IPIM) joined hands to establish the “Guangdong, Hong Kong and Macao Economic and Trade Platform”. The Platform was launched on 4 December 2019 in Hong Kong. Representatives from Guangdong, Hong Kong and Macao are expecting that the Platform can bring more business opportunities to enterprises in the three places.

The Platform includes economic data of 23 cities including Guangdong, Hong Kong and Macao, such as local GDP, total imports and exports. It will provide relevant information in accordance with the development of Guangdong-Hong Kong-Macao economic and trade cooperation. For example, HKTDC will provide regional statistics of various industries, implementation plans of relevant policies and research reports of different industries.

In the launching ceremony, Mr Chen Yuehua, Deputy Director of Department of Commerce of Guangdong Province, said that the launch of this Platform would provide convenient and efficient consulting services for global investors and traders, which will considerably benefit the overall development of the Greater Bay Area.

He said that the Guangdong-Hong Kong-Macao Greater Bay Area development plan has attracted the attention of many investors around the world. If the advantages of the manufacturing industry in the Greater Bay Area and the advantages of the Hong Kong and Macao service industries are combined, the three places can work together to gain a foothold in the global manufacturer market.

Mr Stephen Liang, Assistant Executive Director of HKTDC said that this Platform demonstrates that enterprises are seizing business opportunities. At the same time, it also has become a window for investment and economic co-operation among Guangdong, Hong Kong and Macao, promoting the common development of the three places. He believed that with the enhanced cooperation between the three places, Hong Kong will certainly be able to assist GBA companies in growing towards high-end development, using Hong Kong as an international trade platform, to “go global” and bring in investments.

Mr Vincent U, Executive Director of IPIM said that only co-operation and innovation can trigger different increments. The “Guangdong, Hong Kong and Macao Economic and Trade Platform” is exactly the result of the co-operation and innovation of the economic and trade departments of the three places. He believed that entrepreneurs can better understand the Greater Bay Area through this platform and thus obtain more business opportunities. 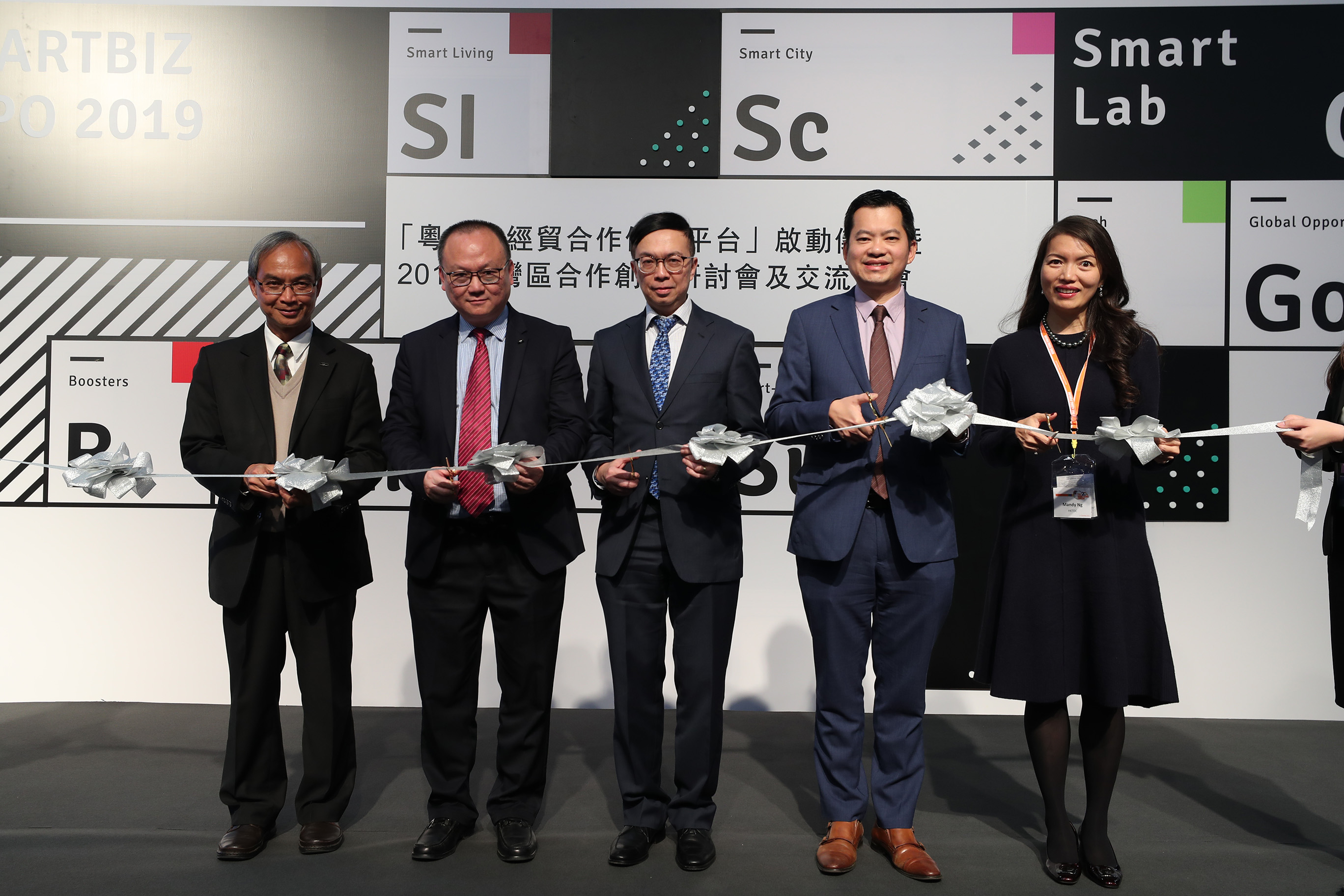 Launching ceremony of the “Guangdong, Hong Kong and Macao Economic and Trade Platform”