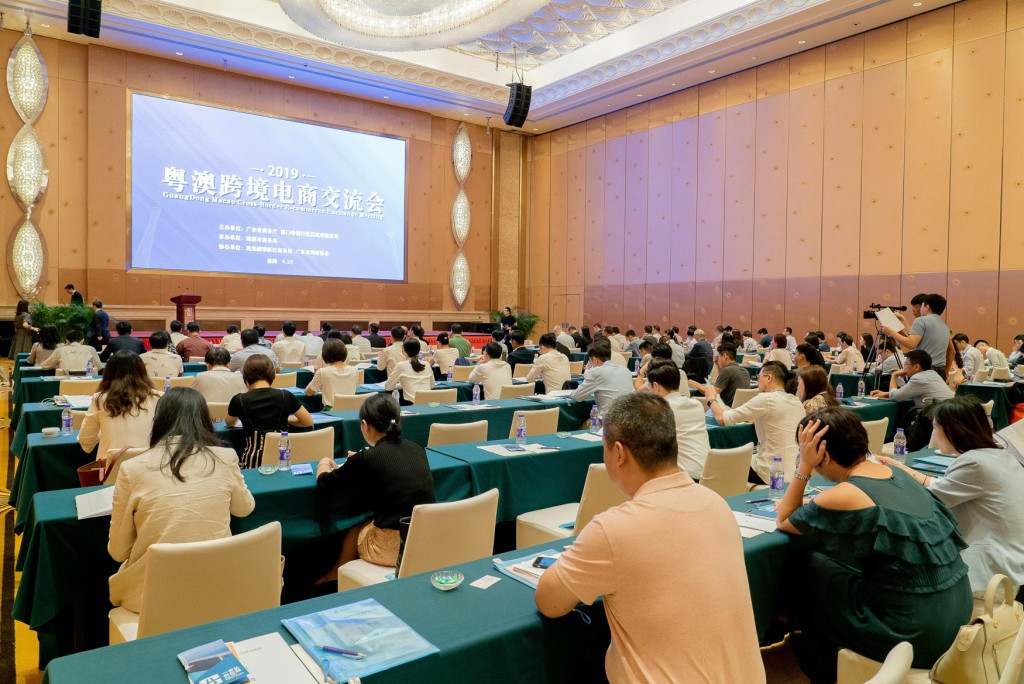 On 25 June, the Department of Commerce of Guangdong Province and the Economic Bureau of the Macao Special Administrative Region (SAR) hosted the 2019 Guangdong-Macao Cross-Border E-commerce Exchange Conference in Hengqin New District, Zhuhai. Nearly 200 representatives from Macao’s Economic Bureau and from commerce departments from different cities across Guangdong Province, as well as from enterprises in the E-commerce sectors of the two jurisdictions, took part in the event. The Deputy Director-General of the Department of Commerce of Guangdong Province Ren Shao; the Deputy Director of Macao’s Economic Bureau Chan Tze Wai; and the Deputy Secretary-General of Zhuhai Municipal People’s Government Zhou Chang, attended the conference and each of those officials gave a speech at the event.

In her speech, Deputy Director of Macao’s Economic Bureau Ms Chan gave an introduction to the development of the cross-border E-commerce sector in Macao. The Macao SAR Government has established an Inter-departmental E-commerce Working Group, and has also supported Macao’s chamber of commerce in launching a “One-Stop” E-commerce service platform, aiming to explore fully the cross-border E-commerce logistics pipeline between Macao and Mainland China, and to encourage small and medium-sized enterprises (SMEs) to explore the local and overseas markets. Ms Chan added that the Economic Bureau would strengthen communication with the relevant authorities from Guangdong Province in a number of fields; commit to the advancement of the Greater Bay Area; improve co-operation mechanisms; enhance resource sharing; and jointly promote the moderate economic diversification of Macao.

Deputy Secretary-General of Zhuhai Municipal People’s Government Mr Zhou gave a presentation about progress regarding construction of the Zhuhai Cross-border E-commerce Comprehensive Pilot Zone (the Zone). He also indicated that Zhuhai would continue to capitalise on the Zone’s strengths, deepen co-operation between Zhuhai and Macao, and work together with partners in Portuguese-speaking Countries and Latin American nations in order to build a better future for all concerned.

At the conference, presentations on cross-border E-commerce supervision policies were respectively given by the Guangzhou Customs, the Zhuhai Taxation Bureau and other governmental departments. Representatives from the Management Committee of Hengqin New Area also introduced the progress of integration of the cross-border E-commerce sector. Representatives from Lanping, in Yunnan Province; Kashgar in Xinjiang Autonomous Region; Quannan in Jiangxi Province; and Ganzi in Sichuan Province, were invited to share their insights on the topic with the conference attendees. Representatives of enterprises from Guangdong Province and Macao also shared with those present their experiences of relevant commercial activity. After the meeting, the delegates visited the Zhuhai-Macao Cross-border Industrial Zone, the Hengqin New District Exhibition Hall and Hengqin Bringbuys Network Technology Co Ltd. The conference was aimed at enhancing mutual understanding between Guangdong Province and Macao. Quality agricultural products from other places in Mainland China were also promoted during the event.

Since its establishment in April 2015, the China (Guangdong) Pilot Free Trade Zone has achieved remarkable success and effectively facilitated the expansion of the professional-services sector; fostered innovation in co-operation regarding legal services; improved port customs clearance and immigration; expanded room for industrial development in Hong Kong and Macao; and contributed to the establishment of a Demonstration Zone for Comprehensive Co-operation among Guangdong-Hong Kong-Macao Greater Bay Area.

Expansion in Hong Kong and Macao of the Professional-Services Sector

As of the end of 2018, more than 14,000 enterprises from Hong Kong and Macao were registered in the Zhuhai Cross-border E-commerce Comprehensive Pilot Zone, and there were 11 joint ventures between Hong Kong, Macao and Guangdong law firms. Professionals from Hong Kong and Macao, in sectors such as finance, construction, planning and patent services, are allowed to register in the pilot zone and provide their professional services. Over the years, several services have been launched, including: joint E-cheque clearing between Guangdong Province and Hong Kong; the docking of Guangdong and Macao clearing systems; the Guangdong-Hong Kong-Macao cross-border payment settlement system; cross-border insurance services for road vehicles; and a cross-border housing mortgages system.

More than 60 percent of the cases handled by the Qianhai Court, in Shenzhen, were related either to Hong Kong, Macao, Taiwan or residents from other places outside Mainland China. An aggregate of 12 adjudicators from Hong Kong and Macao was selected to assist the court in its work, and a total of 20 cases was mediated or underwent arbitration under the legal system applicable in Hong Kong. The mechanism for arbitration in commercial matters – as applicable to the Greater Bay Area – has been continuously improved via the establishment of the Guangdong-Hong Kong-Macao Greater Bay Area Mediation Centre, as well as of the Shenzhen Court of International Arbitration, and the Belt and Road Initiative Legal Service Alliance.

The implementation of 24-hour customs clearance at Hengqin Port provides a convenient service to the 2,500 Macao-registered vehicles permitted to use the facility. Since the launch of the Guangdong-Hong Kong Cross-border Warehouse, the aggregate number of vehicle movements taking advantage of speeded cross-border procedures reached 172,000. The development of a land-air transport network between Shenzhen and Hong Kong has reduced by about one third the costs and time involved in logistic procedures. The expansion of the scope of mutual acceptance of testing data (i.e., results) between Guangdong and Hong Kong has also shortened to three hours the time for clearance procedures at the port of inspection.

Continuous Expansion of Industrial Development in Hong Kong and Macao

The establishment of several platforms for industrial development has been accelerated in recent years. They include the Nansha Guangdong-Hong Kong Deep Co-operation Zone; Qianhai Shenzhen-Hong Kong Culture and Creative Town; Shenzhen-Hong Kong Design & Creative Industry Park; and the Guangdong-Macao Cooperation Industrial Park in Hengqin New Area. Youth-innovation and entrepreneurship centres in the three places have attracted 433 enterprises from either Hong Kong or Macao.