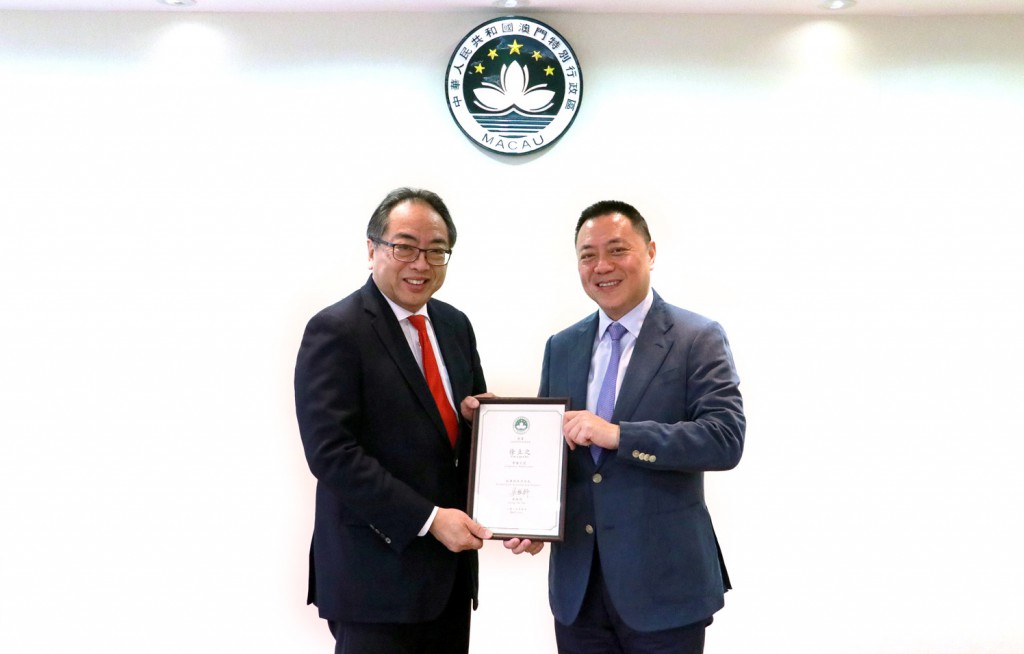 The Secretary for Economy and Finance Leong Vai Tac confers the certificate of appointment as “Conference Ambassador” to Prof Tsui Lap Chee, President and Founding member of the Academy of Science of Hong Kong and world-renowned molecular biologist.

Prof Tsui Lap Chee, President and Founding member of the Academy of Sciences of Hong Kong and world-renowned molecular biologist, was appointed as “Conference Ambassador” by the Secretary for Economy and Finance of Macao SAR Leong Vai Tac on 12 April. Prof Tsui pointed out that Macao has well developed software and hardware facilities for hosting conventions and exhibitions, which, together with the Macao SAR Government’s policy that “gives priority to convention and provides precise support”, will be able bring in more international academic conferences to Macao.

At their meeting, Leong Vai Tac said that the Macao SAR Government is striving to nurture the moderate diversification of the city’s economic development and maintain Macao’s long-term prosperity by various means including intensifying the endeavour to foster the development of the convention and exhibition industry (also broadly known as the MICE industry) and launching the “Conference Ambassador” Programme. The Programme aims at enhancing the exchange between Macao and international community and introducing more international conventions in Macao via the influence and broad network of “Conference Ambassadors”. Mr Leong thanked Prof Tsui for accepting the appointment to be a “Conference Ambassador” and his support for Macao. With the support of the Macao SAR Government and the efforts of the MICE sector, the city’s convention and exhibition industry is developing qualitatively, which helps attract authoritative figures from different domains and businessmen to Macao for joining events and leisure.

Prof Tsui said that he has close relationship with Macao and has witnessed the city’s growth via his collaboration with various sectors. According to him, multiple elements including the development of Macao’s local tertiary education institutions, talent cultivation policy, quality venues and facilities for hosting conventions and exhibitions and the opening of the Hong Kong-Zhuhai-Macao Bridge suggest that Macao has strong advantages in terms of MICE software and hardware facilities. These advantages are expected to bring in more international academic conferences for Macao and foster co-operation in various ways.

Prof Tsui Lap Chee is a world renowned molecular biologist and an authority on molecular genetics that has made significant contributions to the research into cystic fibrosis. He is the President of the Academy of Sciences of Hong Kong, President of Victor and William Fung Foundation, Director of Qiushi Academy for Advanced Studies and Residential College of Master of International Campus of ZheJiang University, Honorary Professor at University of Toronto, and Former President and Vice-Chancellor of the University of Hong Kong.