The forum has attracted more than 300 participants

The “Mozambique-Fujian-Macao Trade and Investment Forum” was held on 18 October jointly by the Agency for Investment and Export Promotion of Mozambique, the Department of Commerce of Fujian Province and IPIM, attracting about 300 government officials and representatives of enterprises and chambers of commerce. During the forum, a total of eight co-operation projects were signed.

Mr Ragendra Berta de Sousa, Minister of Industry and Commerce of Mozambique, said in his speech that Mozambique is rich in agricultural, fisheries, mineral resources and natural gases, referring to these areas as of tremendous potential for investment. He expressed his expectation that the infrastructure in Mozambique could be further improved with various approaches including building roads, opening up waterways to link the north to the south and speeding up cargo movement. The Minister also looked forward to enhance the co-operation and exchange with China.

Mr Zhang Zhinan, Executive Vice-Governor of the Fujian Provincial People’s Government, stated that Fujian and Macao had actively integrated themselves into the building of the Belt and Road and signed many agreements on economic, trade and MICE collaboration in recent years. Fujian province aimed to expand trade exchanges with Mozambique and other Portuguese-speaking Countries by virtue of the role of Macao as a platform between China and Portuguese-speaking Countries. It was also expected that all parties could draw on each other’s strengths, resources and industrial structures to strengthen co-operation in areas such as fisheries, engineering, infrastructure and resource exploitation to foster new economic impetus.

According to the Secretary for Economy and Finance of the Macao SAR Mr Leong Vai Tac, Macao would continue to leverage its function of precise liaison as a platform between China and Portuguese-speaking countries, serve the needs of our country and deliver the strengths of Macao. On one hand, Macao will help Fujian and other provinces and cities in the Mainland to further expand markets in Portuguese-speaking Countries, and carry out effective foreign economic and trade co-operation by leveraging the role of Mozambique to connect with Africa; on the other hand, it will actively assist enterprises from Mozambique and other Portuguese-speaking Countries to pragmatically carry out collaborations with Fujian Province and its adjoining areas, broadening their horizons and leading them to a larger market in China. While promoting multi-lateral and diversified collaboration, Macao could achieve moderate diversification of its economy and sustainable development.

A total of eight co-operation projects were signed at the forum among enterprises, business associations and academic institutions from Macao, Fujian and Mozambique and Fujian, covering a variety of sectors including medical services, traditional Chinese medicine, technology, environmental protection and so on. The economic departments from the three regions also gave introduction of the business environment and advantages of their regions respectively.

In the market research session of the forum, representatives of enterprises and institutions from the three places discussed emerging business opportunities for co-operation between China and Portuguese-speaking Countries. They agreed that the economic and trade co-operation between Mainland China, Macao and Mozambique has much to offer based on the mutually complementariness of their advantageous resources. Mozambique is rich in natural resources while Mainland China has advanced technologies for resources exploitation and infrastructure; and Macao, as a platform between China and Portuguese-speaking Countries, boasts an edge in its language and legal system, allowing the city to serve as a bridge to link all parties together. The three parties will together bring about mutual benefit and achieve common development through further exchange and collaboration. 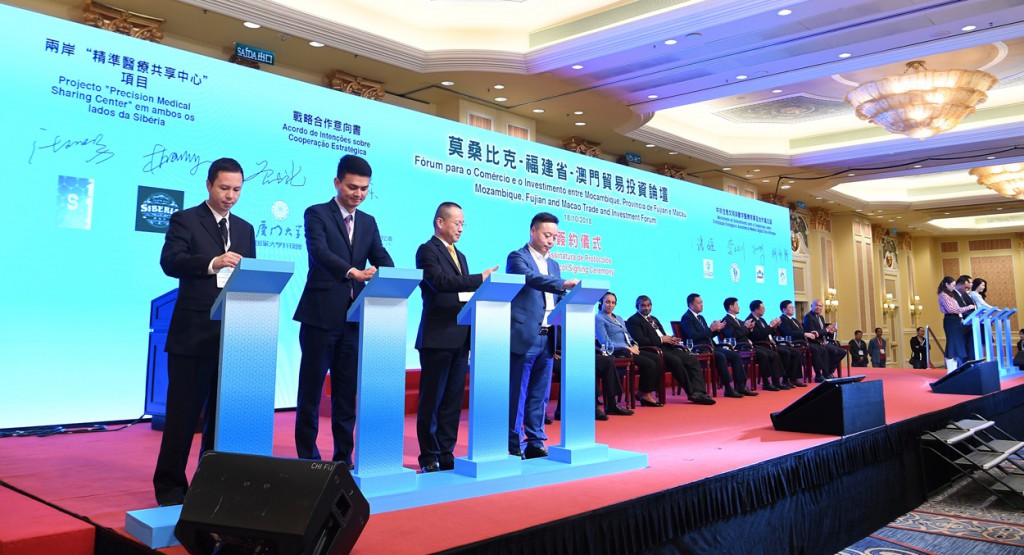