The “23rd Macao International Trade and Investment Fair (23rd MIF)” and the “2018 Portuguese-speaking Countries Products and Services Exhibition (Macau)” (2018 PLPEX) will be held concurrently on 18 to 20 October at the Venetian Macao. This year, the two exhibitions build themselves on the foundations of the past editions while breaking out of the box, helping enterprises integrate themselves into the “Belt and Road” development and to seize the opportunities arising from the Guangdong-Hong Kong-Macao Greater Bay Area and bring in more business opportunities by taking advantage of the Macao’s role as a platform between China and Portuguese-speaking countries (PSC).

The MIF is organised by the Macao Trade and Investment Promotion Institute and co-organised by 15 economic and commercial departments as well as business associations from Macao, Mainland China, and Hong Kong. This year’s MIF inherits the theme “Co-operation – Key to Business Opportunities”. The exhibition covers an area of ​​24,000 square meters and has more than 1,500 booths. In addition to the exhibition areas for the provinces and cities of China, the countries along the “Belt and Road”, PSC and Europe, this year’s exhibition sets up for the first time a number of special-theme exhibition areas including the Guangdong-Hong Kong-Macao Greater Bay Area Business Zone, the Guizhou Congjiang County Exhibition Area, the Smart Zone, the Youth Entrepreneurship Exhibition Area, and the Featured Finance Pavilion. The exhibition covers a variety of domains such as “Belt and Road” Initiative, the Guangdong-Hong Kong-Macau Greater Bay Area, the Platform between China and PSCs, SMEs, youth entrepreneurship, featured finance, E-commerce, and traditional Chinese medicine. During the same period, a number of summits, forums, and roundtables, covering economics, trade, exhibition and investment will also be held at the MIF.

In October 2005, the MIF became Macao’s first event approved by the Global Association of the Exhibition Industry (UFI). As an annual gala of the Macao’s convention and exhibition industry, this year the MIF has invited Mozambique and Fujian Province as its “partner country” and “partner province”. The Mozambique Investment and Export Promotion Agency has set up a 200-square-meter “Mozambique Pavilion”; the Fujian Provincial Department of Commerce has formed the “Fujian Pavilion” of nearly 400 square meters. On the first day of the event, the “Mozambique-Fujian-Macau Trade and Investment Forum” will be staged, where the representatives from the three regions’ economic and trade departments and large enterprises, as well as experts and scholars, will gather together in Macao – a platform between China and Portuguese-speaking Countries – to manifest the economic and trade environments, investment policies and advantageous resources of the three places. They will also share their hands-on experience and insights into how to use Macao’s role as a platform between China and the Lusophone world to expand co-operation and business opportunities and enhance deep integration.

The “8th Asian Trade Promotion Forum (ATPF) Exhibition” will be held concurrently at this year’s MIF. The representatives of the trade promotion organisations of ATPF together to discuss cooperation, seek common development and share opportunities. During this period, networking activities will be arranged for representatives of the ATPF and from the Guangdong-Hong Kong-Macao Greater Bay Area and local chambers of commerce, in an effort to create an effective exchange and matching platform.

The 2018 PLPEX continues to be held in parallel with the 23rd MIF. The exhibition area has increased to over 6,000 square meters, and more than 250 booths will be set up to attract companies from from eight Portuguese-speaking countries, as well as PSC products and services agents from Mainland China, Hong Kong and Macao. The exhibition of PLPEX encompasses an array of sectors including agricultural products, food, building materials, apparel, handicraft, tourism products, investment projects, information technology and so on. Embodying Macao’s function as a convention and exhibition center for economic and trade co-operation between China and Portuguese-speaking Countries. The 2018 PLPEX strengthens its services to assist exhibitors in engaging in exchanges and co-operation opportunities.

This year’s PLPEX will roll out the “Brazil Unmanned Shop Experience Zone (Brazil Center)” to showcase Brazilian assorted products with an innovative retailing approach and promote Brazilian products through interactive experiences. The Zone will combine a series of publicity and promotional activities to seek Sino-Brazilian economic and trade co-operation and cultural exchanges. At the same time, the first “China-PSC E-commerce Experience Pavilion” and the “Portuguese-speaking Countries Cross-border E-Commerce Workshop” will be held to present the “cross-border e-commerce + new retail model”, with a view to helping merchants from PSCs to enter the Mainland market through online platforms. The first ever “Portuguese-speaking Countries Wine and Food Business Matchmaking Meeting” and the “Portuguese-speaking Countries Food Experience Zone” are set up at this year’s exhibition. At the same time, the “China and Portuguese-speaking Countries SMEs Business Service Area,” and other facilitations are available at the PLPEX to help Chinese and PSC companies in “bringing in investment” and “going global. During the exhibition, fashion shows, singing performances, and special handicrafts exhibitions from Portuguese-speaking countries, as well as many professional forums and seminars, including the “Young Entrepreneurs Forum of China and Portuguese-speaking Countries”, will be held. These activities will be jointly exploring the collaboration opportunities derived from featured finance and the rapid growth of the Guangdong-Hong Kong-Macao Bay Area, assisting PSC exhibitors to grasp the golden chance of the Guangdong-Hong Kong-Macao Greater Bay Area, and advance the development of Macao’s featured finance industry.

During the PLPEX, local and international merchants will inspect the Macao Young Entrepreneur Incubation Centre and the Macau Brand Incubation Center and participate in community tours, enabling the participants to experience the innovative and entrepreneurial atmosphere of Macao, building a platform for youth entrepreneurship and startup projects to increase co-operation and investment opportunities, and boost the local community economy. In addition, after the exhibition, the organiser will organise entrepreneurs from Portuguese-speaking countries and Macao to visit the cities of the Guangdong-Hong Kong-Macao Greater Bay Area, including Shenzhen and Zhongshan. The tours will also include inspections in local business associations and enterprises, as well as key local projects, giving companies from Portuguese-speaking countries a deeper understanding of the policies and development opportunities of the Greater Bay Area.

Free professional business matching services will be provided during the MIF and the PLPEX. Exhibitors can search for suitable exhibitors/suppliers or purchasers to seek business collaboration by signing up on the “Online Business Matching Service Platform”. A series of matching sessions and industrial procurement sessions will be held in the business matching area, where famous hotels, supermarkets, e-commerce companies, and project developers from the Guangdong-Macao Co-operation Industrial Park have been invited to join the procurement sessions, ushering in more collaborations and business opportunities. In addition to traditional credit card payment method, new electronic payment services such as Macao Pass, M+Pay, and Alipay have been introduced to the SMEs Exhibition Area this year.

After last year’s trial operation, the Macao MICE Pass will allow limitless access to the four major events organised or coordinated by the Macao Trade and Investment Promotion Institute (including MIF, MIECF, MFE and PLPEX). The 23rd MIF and the 2018 PLPEX will be open to trade visitors on 18 October, and to the general public on 19 and 20 October. A number of free shuttle buses travelling between the venues, North District, Central District and Taipa, are available to motivate green travel. 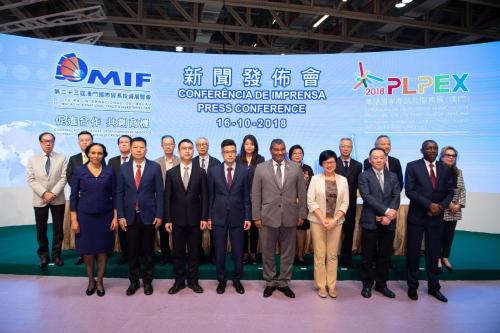 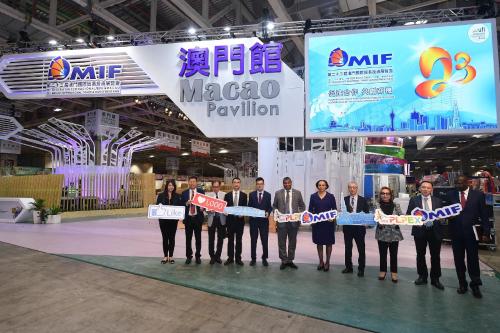